Waiting for the Myanmar Military Junta to Bend to Its Knee 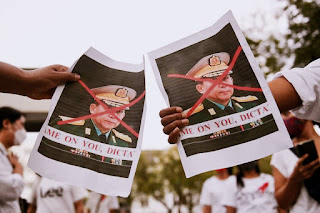 UMMATIMES - Various countries that have always defended Myanmar's military junta are now starting to put pressure on them. For example, Russia has opened its voice for the first time regarding violence by the security forces against anti-coup protesters.
Russian government spokesman Dmitry Peskov said that although his country is closely related to Myanmar, this does not mean they will remain silent.
"This does not mean we can accept the tragic events that are happening in this country. We are very worried about the increase in the number of civilian casualties," said Peskov while attending a military parade in Myanmar, quoted on Friday (2/4).
China, which has been on the military side, now appears to be showing changes in its relationship with Myanmar.
When the United Nations (UN) Security Council held an emergency meeting to respond to the upheaval in Myanmar on Wednesday (31/3), China did put up a body and stressed that sanctions would only add to the situation.
However, researcher and Executive Director of the UK-based Burma Human Rights Network (BHRN), Kyaw Win, continues to see a different movement from China in recent years.
"Now, China has many interests in Myanmar and they know that these interests will not be safe just by supporting the military," Kyaw.
Kyaw then discussed that the BHRN began to smell indications of China supporting an ethnic armed militia alliance in northern Myanmar known as the Northern Alliance, aka the Northern Alliance.
"What we see is that China is also supporting ethnic militias in Myanmar, like the very strong Northern Alliance. They are spreading all over and they are supported by China," Kyaw said.
The "closeness" between China and the Northern Alliance began to deteriorate since around 2016. At that time, the Northern Alliance launched a counterattack against the Myanmar military in Muse, a crossing area on the Chinese border with a trade value of US $ 4 billion per year.
Since China agreed, a number of high-ranking Northern Alliance officials have visited Beijing several times for peace talks. The two sides reportedly began to establish good relations in their respective interests, although China has always denied reports of this closeness.
According to Kyaw Win, the Northern Alliance has a formidable strength, mainly because its formation is strengthened by four large ethnic militia groups. With human resources, weapons, other resources, the Northern Alliance can last up to 17 years.
"However, they should now unite with other ethnic militia alliances from other regions under one banner and launch attacks from all directions to weaken the military."
In time, a number of armed militia groups in other areas did begin to declare opposition to the military junta.
The Kachin Independent Army, one of the militias in the border area with Thailand, Kachin, has even launched attacks on security forces.
The military also hit the Kachin with an air strike which caused about 3,000 people to flee to Thailand. Kyaw thinks attacks from militia groups like this will weaken the junta, which is also busy handling demonstrations.
"They are weakening. They cannot fight all at one time. Now, all ethnic militias from the north, east, south, west, all militias with large armed forces are starting to unite against the Myanmar military," said Kyaw.
The Myanmar military has proved overwhelmed. On Thursday (1/4), they even offered a ceasefire to a number of armed militias.
When the military is overwhelmed at home, according to Kyaw, the pressure from the international community will be more pronounced, especially if countries continue to apply sanctions both unilaterally and multilaterally.
"When the military is weak, new international powers can enter effectively. The military cannot win this battle. They are too weak," said Kyaw.