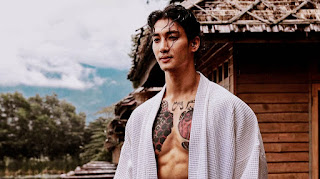 UMMATIMES - Paing Takhon (25), an actor and model from Burma, Myanmar, has been arrested by military forces.
The arrests were made on April 8, 2021, at 5 am local time. It is known that the young actor participated in the mass action condemning the coup carried out by the Myanmar military.

So who is the figure of Paing Thakon?

Paing Thakon made a scene after becoming a monk viral for 10 days. His photos went viral on social media, revealing his muscles wrapped in monk robes. Reporting from Tantan News, even netizens label him as the Handsome Monk.
Paing Takhon, was not only handsome, but also almost 190 cm tall. Paing Takhon made her debut as a model in 2014.
He made a career as a spokesperson for OPPO cellphones and the first Myanmar model to appear at the Victoria's Secret event. His appearance and existence are now equal to many Asian handsome men, including Siwon, Wang Yangming, and Takuya Kimura.
Paing Thakon was once known as the 'Asian Water Rangers' because of his long hair. He also has other labels such as 'Wild Edition Kim Soo Hyun'.
He has released footage and film work. Paing Thakon was selected as one of the top 10 actors by The Myanmar Times in 2019. It is known that Paing Takhon was born into a rich merchant family in Myanmar, and was originally the heir to a bank. Paing Thakon is also known to be an animal lover, seen from the many photos of him with cats and dogs.