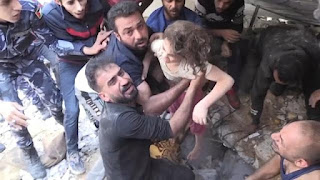 UMMATIMES - Nadeen Abdullatif, a 10-year-old Palestinian girl, survived the bombing at the Al Shati camp in Gaza and shared her story about the Israeli attacks.
"I don't really sleep well at night these days. I heard the missiles, and the missiles that destroyed this house were so loud that my bedroom window almost broke," Nadeen said in a video uploaded by Turkish media TRT World via Twitter, Sunday.
"We have nothing, we have no weapons or missiles. We have nothing to protect ourselves. We only have the power of God with us," he said in the video.
According to the Palestinian Ministry of Health, the death toll from the Israeli attack on the Gaza Strip on Sunday rose to 197, including 58 children and 34 women. The number of injured victims reached 1,235, while dozens of buildings were destroyed or damaged.
Tensions that started in East Jerusalem during the holy month of Ramadan spread to Gaza after Palestinian resistance groups pledged to retaliate against Israeli attacks on the Al-Aqsa Mosque and Sheikh Jarrah.
Israel occupied East Jerusalem, where Al-Aqsa is located, during the 1967 Arab-Israeli war and annexed the entire city in 1980, a move never recognized by the international community.