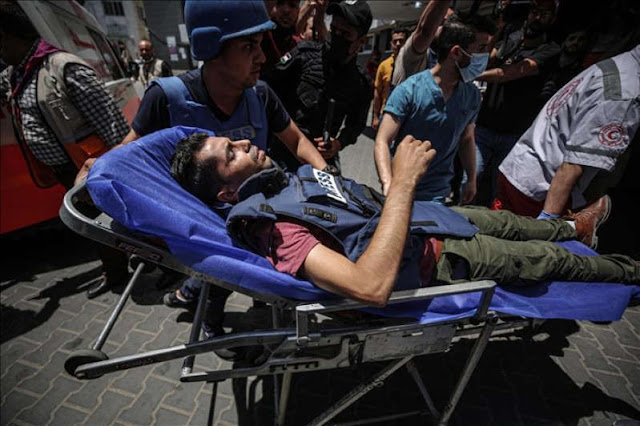 UMMATIMES - Anadolu Agency photojournalist Mohammad Dahlan suffered bullet wounds from an Israeli missile attack on the Gaza Strip on Wednesday. Dahlan was injured in the leg when an Israeli missile hit his home in the Tel al-Hawa neighborhood, Gaza City.
The photojournalist was rushed to the hospital for treatment. Last week, two Anadolu Agency journalists were also injured while covering Israeli attacks on the Gaza Strip.
According to the Palestinian Ministry of Health, at least 219 Palestinians have died, including 63 children and 36 women, while 1,500 have been injured in Israeli attacks on the Gaza Strip since May 10. In addition, 12 Israelis were also killed in rocket attacks from the Gaza Strip.
The tensions that started in East Jerusalem during the holy month of Ramadan spread to Gaza as a result of Israeli attacks on worshipers at the al-Aqsa Mosque compound and the Sheikh Jarrah neighborhood.
* Ahmed Asmar contributed to this story from Ankara