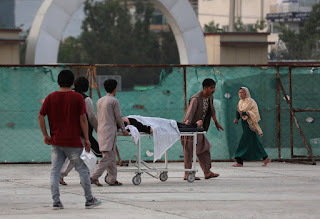 UMMATIMES - The Chinese Ambassador in Afghanistan, Wang Yu, believes the bomb attack on Sayed-ul-Shuhada High School, Dasht-e-Barchi, Kabul occurred due to several factors. One of these is the "sudden" withdrawal of US military forces and other foreign troops from Afghanistan.
"The Chinese government asks foreign troops in Afghanistan to reconsider the safety and security of its citizens. In addition, make an appropriate withdrawal and avoid things that make Afghans suffer even more," the Chinese government said in a statement, quoted by Reuters news agency on Sunday. , 9 May 2021.
As previously reported, the explosion at Sayed-ul-Shuhada High School occurred on Saturday last week when the related school students were preparing to go home. The explosion came from a car bomb, which has been known as the mainstay of the modus operandi for Sunni militias and the Taliban.
As of this writing, the number of casualties is known to be 68 people. The number of injured victims was 165, some of whom were undergoing treatment. According to Afghan authorities and eye witnesses, most of the victims were schoolgirls.
Two weeks before the explosion occurred, the US government decided to withdraw its troops from Afghanistan. It is their commitment to ending America's longest war in the Middle East, War on Terror, which took two decades.
The withdrawal was agreed to take place in stages as of May 1, 2021. However, the withdrawal was questioned by a number of parties who were worried that it would make Afghanistan's region unsafe. Moreover, the Taliban group did not agree to the phased withdrawal scheme because they thought it was against the negotiation results last year. They want a lump sum withdrawal.
As of this writing, the link between the withdrawal of American troops, the Taliban and the explosion was not yet known. However, Dasht-e-Barchi District has often been the target of attacks by terror groups and militias such as the Taliban or ISIS. One reason is because the area is densely populated with members of the Shia Muslim community.
Last May, for example, there was a shooting terror at the Dasht-e-Barchi Mother and Child Hospital. Three of the perpetrators, disguised as policemen, opened fire on patients at the hospital, even while the birth operation was taking place there. A total of 14 people died in the incident.

Various parties and neighboring countries condemned the car bomb terror that occurred. Pope Francis of the Vatican, for example, called the explosion in front of Sayed-ul-Shuhada High School an inhuman act.
The Indian Ministry of Foreign Affairs said similarly. In their press release, they stated that the terror car bomb in Dasht-e-Barchi threatened the future of a number of Afghans.
"The perpetrators clearly intend to destroy all achievements and results of Afghanistan's hard work over the past two decades," they said.
The Indonesian government did not lag behind in commenting. The Indonesian Ministry of Foreign Affairs condemned the attacks and conveyed sorrow and sympathy to all the people of Afghanistan, including the families of the victims.
"We will continue to support efforts to fight terrorism and achieve a sustainable peace in Afghanistan," said the Indonesian Ministry of Foreign Affairs.