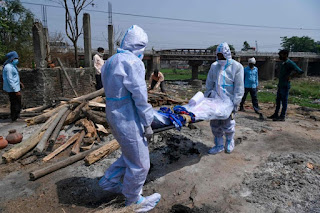 UMMATIMES - India again recorded the highest additional death from Covid-19 in a day, Saturday (8/5). At least 4,187 deaths were recorded which brings the total deaths across India since the pandemic to 238,270.
India's Ministry of Health also recorded 401,078 new cases of Covid-19 in 24 hours, Saturday. The country of 1.3 billion people is now the third country after the US and Brazil to report more than 4,000 deaths in a single day.
India has been struggling with a second, deadly wave that has severely disrupted its health system. The daily increase in cases and deaths leads to insufficient supplies of oxygen in hospitals as well as beds and coronavirus medication drugs such as Remdesivir.
Meanwhile, a group of Indian-American doctors sent 5,000 oxygen concentrators to India to save the lives of those affected by the virus. "These units will be welcomed by the newly created local Indian partners, hospitals, emergency isolation centers, mobile hospitals and charities so that local partners in remote parts of India can use these units to provide oxygen to Covid patients as needed," he said. chairman of the Federation of Indian Medical Associations DR. Raj Bhayani, in a statement quoted by the Anadolu Agency website, Saturday (8/5).
Many state governments in India have also announced strict lockdowns in the second wave. The new government in the southern state of Tamil Nadu on Saturday announced a total national lockdown from May 10 to 14 in the state.
Rajasthan, Kerala, Madhya Pradesh and Karnataka are among the states that have announced complete closures to contain the spread of the virus during the second wave of the outbreak.