How Serious Are European Efforts To End Violence Against Women? 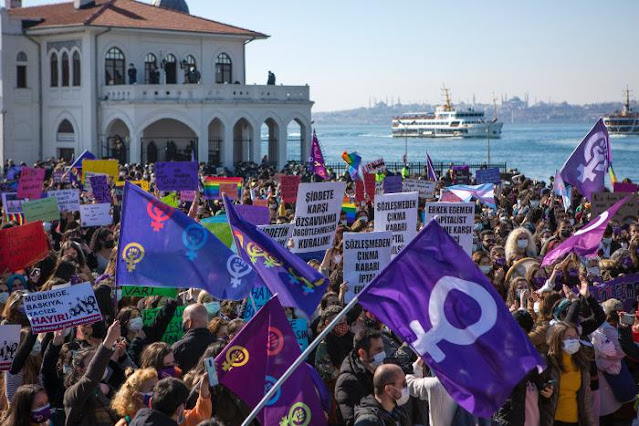 UMMATIMES - Recently, the Istanbul Convention was overshadowed by some government resistance, including from Turkey, which in March announced it was withdrawing from the agreement agreed to 10 years ago. Despite the rebellion, some progress has been made.

What has been accomplished?

Apart from Turkey, 44 countries have signed the agreement. Experts and activists say one of the biggest achievements of the Istanbul Convention is that many countries, such as Germany, Sweden, Denmark, Croatia and Greece, have changed the legal definition of rape according to consensus.
"The Greek government at that time really recognized that the Istanbul Convention was where they wanted to implement this domestic law and bring it up to that standard," Anna Blus, a researcher at Amnesty International, told DW.
Previously, most European countries did not define sex without consent as rape. Conversely, many countries require acts of violence, threats or intimidation - meaning prosecutors often have to reduce the charges of perpetrators to a lesser crime of sexual harassment in the hope of being punished.
Since 2018, Spain has announced plans to amend its laws to more closely align with the definition of consensual rape. The Netherlands is also expected to do the same.
Law reform has also been driven by the #MeToo movement, as demands for protection against victims of sexual harassment have increased. "Definitely, I think if there weren't the #MeToo movement, we wouldn't be here," Blus said, referring to several countries that have reformed laws since the movement began.
Hillary Margolis, senior researcher at Human Rights Watch, also noted that the agreement has helped enact laws that criminalize types of abuse, such as forced marriage of minors, female genital mutilation, and stalking.
Another advantage is that some countries are improving services to reach victims of domestic violence. "Finland, for example, is a 24/7 helpline for victims of domestic violence," said Blus.

The agreement stands out more than any other agreement, said Margolis of Human Rights Watch. Although the goal is to end violence against women and girls, supporters never imagined that the agreement would succeed in achieving its life in a decade.
"The Convention itself is in some ways very aspirational. To achieve all of that would be extraordinary - it's a kind of North Star guiding us and pushing the government forward."

Why is there rejection of the agreement?

Recently several countries joined Turkey in voicing its resistance. Poland has also announced plans to quit the convention, a move that attracted many conservatives.
Why? In recent years, the Istanbul Convention has been overshadowed by politicized misinformation, such as promoting gay marriage or defending other LGBT + rights. Apart from that, the agreement only discusses efforts to end domestic violence and violence against women.
"The information that this agreement, for example, promotes homosexual marriage, is not true," Daniel Höltgen, spokesman for the Secretary General of the Council of Europe, told DW.
Activists like Blus and Margolis hope more countries will join in on the agreement. "The convention is about stopping violence against women and girls. That is the only goal. There is no ideology behind it, no religion behind it, no political views behind it," Margolis said.
"This is purely to increase protection for all women and girls." (ha / vlz)