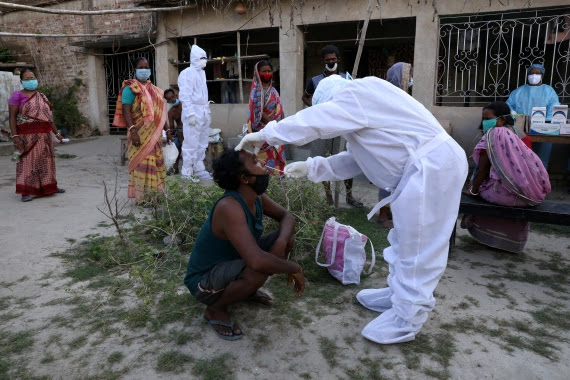 UMMATIMES - Fear and anxiety over illness and lack of access to health care have spread throughout India, causing mental health problems across the country.
"The impact of COVID-19 is not only visible physically, it is surrounded by pain, death and isolation. This crisis has a profound impact on people's mental health," NV Ashwini, founder of the Bangalore-based charity Muktha Foundation, told DW.
Elderly people who are the group most at risk of being infected with the corona have felt their mental health has deteriorated significantly in recent months.
"There has been an increase of more than 50% among the elderly in mental health disorders," the Agewell Foundation, an India-based non-governmental organization, told DW. Mental health disorders include "anxiety, difficulty sleeping, nightmares, depression, weakness, and fatigue."
The organization spoke with about 5,000 elderly people in India in April. Of that number, about 63% reported experiencing symptoms of depression, partly due to loneliness and social isolation.
"Older people diagnosed with pre-existing psychiatric conditions, such as depression, schizophrenia, obsessive-compulsive disorder, and dementia have shown worsening symptoms of chronic obstructive pulmonary disease," Agewell Foundation founder Himanshu Rath told DW.

It's not just the elderly who suffer, the young also suffer from the same mental health problems. "The long-term impact of the pandemic will be severe and it will take a long time to fix. The proportion of young workers affected by the crisis appears to be even higher," Mahesh Vyas, CEO of India's Economic Monitoring Center, told DW.

Management of mental disorders in India

The industrial city of Jamshedpur in the eastern state of Jharkhand has reported a very high number of suicides, at more than 100 in the past four months. Health officials have linked this incident to anxiety and depression related to the ongoing coronavirus pandemic.
"Phone calls have increased three or four times more in the last three months. Today, people are numb with loss and helplessness. Some are experiencing collective sadness," said Nelson Vinod Moses of the Suicide Prevention India Foundation.
Other mental health professionals agree. They warn the repercussions of the COVID-19 pandemic will be a perfect breeding ground for chronic stress, anxiety, depression, alcohol dependence and self-harm.
"The big question is whether the Indian health care system remains ready to deal with the mental consequences of the disease," said Moses.
"This underreported crisis has surfaced. It will only be lessened if we have appropriate community-based care that can be provided at all levels," advises Moses.