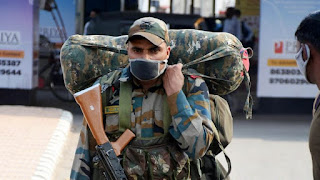 UMMATIMES - India's Defense Ministry said the government would recruit hundreds of former military medics to support its overwhelmed health care system, Sunday (9/5). The country is grappling with record Covid-19 infections and deaths amid calls for a national lockdown.
About 400 medics are expected to serve on contracts for a maximum of 11 months. The Defense Ministry said other defense doctors had also been contacted to receive online consultations.
Covid-19 cases and deaths have hit a record every two or three days. Deaths rose by more than 4,000 for the second day in a row on Sunday.
Many Indian states have imposed tight lockdowns over the past month while others have announced restrictions on public movement and closed cinemas, restaurants, pubs and shopping malls.
However, pressure is mounting on India's Prime Minister, Narendra Modi, to declare a nationwide lockdown as happened during the first wave last year. The Indian Medical Association (IMA) is calling for a complete, planned, and pre-announced lockdown, rather than sporadic curfews and restrictions imposed by states for several days at a time.
"The IMA is astonished at the extreme sluggishness and inappropriate actions of the health ministry in fighting the torturous crisis that was born of the second wave of the devastating Covid-19 pandemic," the association said.
Modi has struggled with criticism for allowing large gatherings at religious festivals and holding massive election rallies over the past two months even as Covid-19 cases surged. The Ministry of Health reported 4,092 deaths over the past 24 hours, bringing the total death toll to 242,362. New cases rose by 403,738, just slightly off record and have increased the total since the start of the pandemic to 22.3 million.
The world's largest vaccine producing country has fully vaccinated more than 34.3 million, or just 2.5 percent of its 1.35 billion population as of Sunday. Support has poured in from around the world in the form of oxygen cylinders and concentrators, ventilators and other medical equipment.