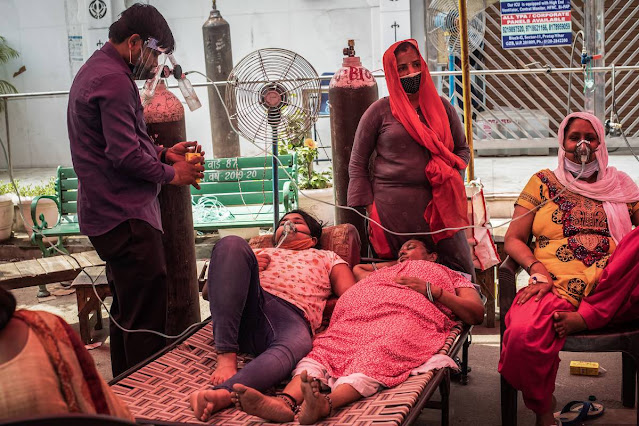 UMMATIMES - India reports a further decline in new Covid-19 cases, although the daily death toll remains above 4,000. But World Health Organization (WHO) experts have criticized the lack of testing in rural areas, where the virus is spreading rapidly.
New infections in India started to decline last week. In the past 24 hours, there were 281,386 cases recorded on Monday, or fell below 300,000 cases for the first time since April 21, 2021. Meanwhile, the number of daily deaths due to Covid-19 in the country reached 4,106 people.
At current levels, India's total caseload since the epidemic struck a year ago will surpass the 25 million mark in the coming days. The total death toll is estimated at 274,390. Even with a drop in cases over the past few days, experts say there is no certainty that infections have peaked.
Concerns are increasing, both at home and abroad, over the new variant B.1.617 which is more contagious. "There are still many areas in the country that have not yet experienced a peak (of infection), the figure is still rising," WHO Chief Scientist Soumya Swaminathan was quoted as saying in a Hindu newspaper.
Swaminathan cited a very high level of national positivity, about 20 percent of the tests conducted, as a sign that perhaps a worse situation is coming. "Testing is still inadequate in many states. And if we look at high levels of testing positivity, obviously testing is not enough. So absolute numbers don't really mean anything when taken alone. It has to be taken in the context of how many tests are done and level tests positivity, "he said.
Hospitals in India are forced to turn down patients. The morgues and crematoriums were also unable to handle the accumulated bodies. Photographs and television images showing the burning of bodies in parking lots, as well as corpses floating on the banks of the Ganges, have fueled public impatience with how the government is handling the crisis.
Official figures from the Indian government overestimate the real impact of the epidemic. Some experts say the true number of infections and deaths could be five to 10 times higher.
Compared to the first wave of the epidemic in India, which peaked in September last year and was largely concentrated in urban areas where testing was more rapid, the second wave that erupted in February raged through cities and rural areas, home to about two-thirds of the population of the nation's 1.35 population. billion people.
"This drop in confirmed Covid cases in India is just an illusion," said S Vincent Rajkumar, a professor of medicine at the Mayo Clinic in the United States.
"First, because of limited testing, the total number of cases is too low. Second, cases can only be confirmed where it can be confirmed: urban areas. Rural areas do not count," Rajkumar tweeted.