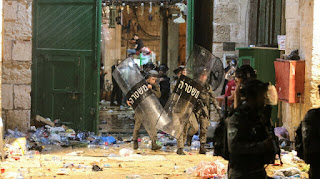 UMMATIMES - The Government of the Republic of Indonesia condemned the attack by the Israeli police on the Al Aqsa Mosque and the forced expulsion of six Palestinians from the Sheikh Jarrah area, East Jerusalem.
The Indonesian Ministry of Foreign Affairs said in a statement that the forced evictions and acts of violence were against various resolutions of the UN Security Council, international humanitarian law.
Especially the IV Geneva Conventions of 1949, and have the potential to cause tensions and instability in the region.
Therefore, Indonesia urges the international community to take concrete steps to stop the forced eviction of Palestinians and the use of violence against civilians.
Previously reported, tension in Jerusalem increased after the rioting on Friday (7/5/2021) night at the Al Aqsa Mosque complex, Jerusalem, Palestine.
The riots began with the deployment of Israeli Police to disperse Palestinians who were carrying out tarawih prayers at the Al Aqsa Mosque.
Israeli police equipped with riot gear forcibly dispersed the tarawih congregation and fired rubber-coated bullets.
Video footage showed congregants trying to defend themselves by throwing chairs, shoes and stones at the Israeli police.
The riots that broke out at the Al Aqsa Mosque were the aftermath of Israeli efforts to expel Palestinians living in Sheikh Jarrah, East Jerusalem.
At least 200 Palestinians were reportedly injured as a result of the violence carried out by Israeli Police at the Al Aqsa Mosque on Friday night.
A number of countries also condemned Israel for the events that took place at the Al Aqsa Mosque, and the efforts to expel Palestinians in Sheikh Jarrah.
Muhammadiyah also strongly condemned the attitude and actions of Israel which shot at congregants who were holding tarawih prayers at the Al-Aqsa Mosque.
The Chairman of the Muhammadiyah Central Board, Anwar Abbas, emphasized that Israel's actions were completely unacceptable because it had usurped all the rights of the Palestinian people.
"They are not only seizing the lands belonging to the Palestinian people and nation and displacing them from their land and houses to build new settlements for the Israeli people," said Anwar Abbas.
He also said that Israel has trampled on the rights of the Palestinian people, especially those who are Muslims, to worship and perform tarawih prayers.
Israel dispersed and opened fire on Muslims who were currently praying. "For this reason, PP Muhammadiyah strongly condemns the barbaric acts they have committed against the Palestinian people," he said.
PP Muhammadiyah also urged the United Nations to condemn and stop the acts of inhumane Israeli zionists.
Muhammadiyah also asked Israel to return the land and rights of the Palestinian people which had been confiscated and damaged.

The PKS faction of the DPR RI strongly criticized the brutal shooting of the congregation who was about to carry out tarawih by the Israeli police which resulted in injuries to at least 178 worshipers.
"What the Israeli police have done is truly barbaric. The shooting blindly at the tarawih prayer congregation at the Al Aqsa Mosque Complex in the glorious month when Palestinian Muslims are ready to welcome Eid is beyond reason and humanity," said PKS Faction Chairman Jazuli Juwaini.
According to Jazuli, the Israeli authorities have again shown the world how they lack empathy, have no conscience, and have lost their sense of humanity and tolerance as citizens of the world.
Israeli brutalism in the Majid Al-Aqsa Complex is not the first. In fact, this complex has a clear legal status as a sacred legacy of the world's Muslims.
"Israel has repeatedly shown an arrogant attitude, restricting the civil liberties of the Palestinian people, including freedom of religion and worship, which are human rights that cannot be reduced or are non-derogable rights," said Jazuli.
This member of Commission I of the DPR asked the Indonesian government to take a firm stance and mobilize international power to criticize and impose sanctions on Israel's brutal actions.
Jazuli, who is also the Vice President of the World Muslim Parliamentary Forum, hopes that the world will no longer close its eyes to the gross human rights violations committed by Israel, on the contrary to provide full support and protection for the Palestinian people.
"Indonesia as the world's largest Muslim country will always take a leading role in defending the independence and protection of the rights of the Palestinian people," concluded Jazuli.
Chairman of the DPP National Mandate Party (PAN), Zulkifli Hasan, strongly condemned the attitude and actions of the Israeli Zionists who shot at congregants who were holding tarawih prayers at the Al-Aqsa Mosque.
According to him, this action really hurt the hearts of everyone, especially the world's Muslims.
The reason is, the violence is in conflict with various resolutions of the Security Council of the United Nations (UNSC).
"I strongly condemn the expulsion and violence perpetrated by the Israeli army against civilians at Masjidil Aqsa and Sheikh Jarrah," said Zulhas.