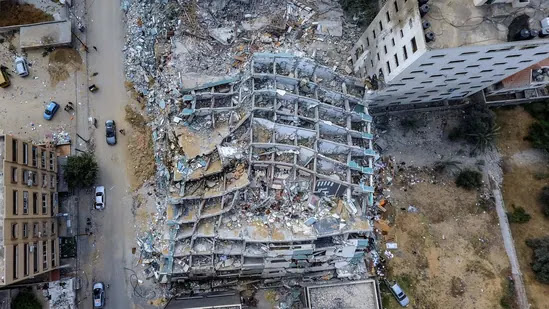 UMMATIMES - The owner of a media office building in Gaza that was destroyed by Israel filed a complaint with the International Criminal Court (ICC). His lawyers say they are suing Israel for war crimes.
Jawad Mehdi called the May 15 attack that flattened the Jala Tower a war crime. The building houses the offices of the Associated Press and the Algerian television station in Gaza. Last week ICC prosecutors said there could be "crimes" in the clashes between Israelis and Palestinians that broke out on May 10.
"The owner of this building, a Palestinian, has mandated his lawyer to file a war crimes complaint with the International Criminal Court," lawyer Gilles Devers said in a statement quoted by The Times of Israel, Sunday (23/5).
This Devers conveyed in front of the courthouse where 10 pro-Palestinian protesters gathered. He said Israel could demonstrate "no military target" in this attack.
"We heard a lot that this building could be destroyed because of equipment or armed resistance teams, something we can argue with after studying the case," Devers said.
"In international law, you can only damage civilian property if it is used for military purposes and this case is not like that. So today in front of the court we presented it and filed a complaint," he added.
Devers said the complaint would be submitted formally on Friday (28/5) via email. Israel claims the Jala Tower is used by military intelligence units and to develop Hamas weapons.
The United States (US) said they received information that supports the claim. But Washington did not reveal whether they accepted the claim or not.
Mehdi said one hour before Israeli missiles destroyed his building, Israeli intelligence officers asked him to evacuate everyone inside the 13-story building. The ICC has no obligation to consider complaints submitted to prosecutors.
The ICC prosecutor has the power to decide which cases will be submitted to the judge. In March, the ICC opened an investigation into war crimes in the Palestinian territories that may have been carried out by Israeli or Palestinian forces since 2014.
This move angered Israelis who are not members of the court. However, Palestine has been a member of the ICC since 2015.