Just giving birth, this mother was forced to take her 6 children to save themselves from attacks in Gaza 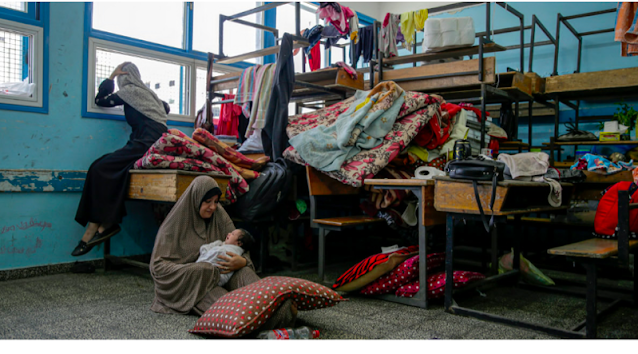 UMMATIMES - A Palestinian named Suheir al-Arbeed has just given birth to his sixth child, Hasan. Currently he lives in a school building. "We need food, clothes, blankets, mattresses and milk," al-Arbeed told Al Jazeera, Monday (17/5).
He admitted that he could not sleep without a mattress. "My back hurts from sleeping on the thin blanket on the floor," he continued. Al-Arbeed admits having to ask other people for diapers for her two-week-old baby.
"I tried to breastfeed her but she is still hungry and continues to cry," said al-Arbeed. As a result of the attacks between Israel and Hamas, al-Arbeed and his children ran towards the Gaza al-Jadeeda school.
It is one of the schools run by UNRWA, the United Nations agency for Palestinian refugees. She escaped her children on foot several kilometers from her home in the Shujaiyah area of northeast Gaza. "There are no cars or transportation available," said al-Arbeed.