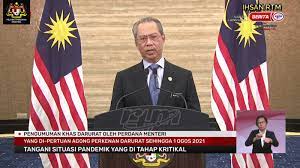 UMMATIMES - Prime Minister Tan Sri Muhyiddin Yassin on Monday night announced additional aid worth RM40 billion or more than IDR 138 trillion to help overcome the impact of the two-week lockdown. The lockdown will take place from 1 - 14 June 2021.
The announcement was made by Muhyiddin through local national television and social media. A total of RM5 billion of the aid will be injected directly into the fiscal.
The direct fiscal injection of RM5 billion involves 12 initiatives that will be implemented based on three main interests, namely increasing public health capacity, continuing government programs called the People's Concern Agenda, and supporting economic sustainability. The aid package, called Pemerkasa Plus, according to Muhyiddin, will strengthen the health care system, continue the previous welfare program, and help businesses overcome the impact of the regional quarantine.
He promised to balance people's lives and livelihoods. On that occasion the Malaysian PM also revealed that there was an additional RM1 billion in health care spending, extended salary subsidies for another month, and a moratorium on loans granted since last year when the country was placed under the Movement Control Order (PKP) 1.0 policy.
"I have to be honest, the government has very narrow fiscal space to spend. But we will try our best to balance life and livelihood," he said.
According to him, since Covid-19 hit, the government has implemented various packages of economic assistance and stimulation totaling RM340 billion. The budget is given to more than 20 million household members and more than two million business actors with economic injections exceeding RM200 billion.