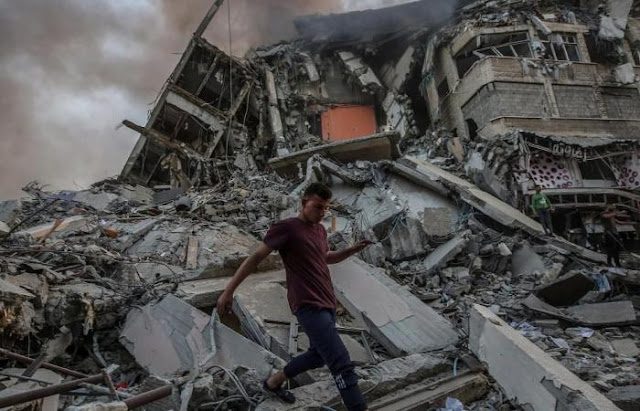 UMMATIMES - The ongoing fighting between the Palestinian militias (Hamas) and Israel adds to the death toll, especially in the Gaza area. Quoted from the Al Jazeera news agency, there were more than 100 fatalities in Gaza and some of them were women and children.
"There are 109 people who have died, including 28 children and 11 women. The number of injured has reached 580 since the attack was launched on Monday," said the Ministry of Health in Gaza, Palestine, Friday, May 14, 2021.
The Ministry of Health continued that the increasing number of victims put pressure on the national health system to increase. Because, at the same time, Palestine is still facing the threat of the COVID-19 pandemic.
Neither Palestine nor Israel has the intention of stopping the attacks. The spokesman for the Israeli Armed Forces, Brigadier General Hidai Zilberman, said that a ceasefire was not a jargon that he could utter at least for the next 1-2 days.
"We've killed 80-90 militants (Hamas)," claims Zliberman. Zilberman added that his unit is also starting to build a force on the Gaza border. However, his unit denied the concentration of force on the Gaza border indicated a ground attack was imminent.
Hamas spokesman Abu Ubaida was unfazed by the Israeli statement. He said Hamas was ready to respond to whatever strategy the Israeli military would use.
"Please build up your strength, both in the air, land and sea. We are ready to fight to the death," said Abu Ubaida regarding the situation in Gaza.
As per this article, the tension between Palestine and Israel has been going on for almost a week. This stems from Israel's move to evict Palestinians from the Sheikh Jarrah area. In fact, Sheikh Jarrah is an area that is recognized as part of Palestine.
The residents who resisted the eviction then staged resistance. The first resistance was a demonstration in the Al-Aqsa Mosque area last week. Israel responded strongly to the demonstration, which resulted in clashes between residents and the authorities. From there, the situation progressed to fighting between the Palestinian militia (Hamas) and the Israeli military with Gaza becoming its hottest point.