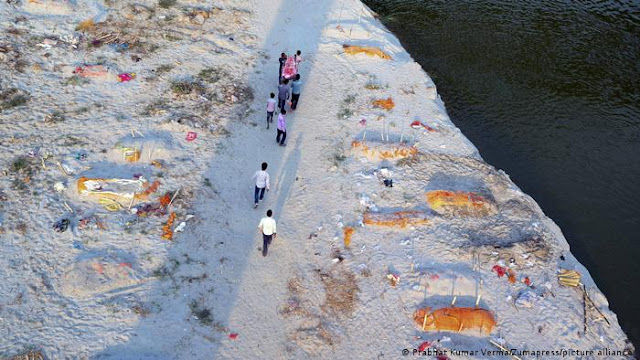 UMMATIMES - The shocking drone view shows how the banks of the Ganges river in India have become a mass grave for those who died from Covid-19.
In recent days, the bodies of most of the bodies believed to have died from COvid-19 have been found floating or buried on the sandy banks of the Ganges river.
Those living near the scene, in the northern state of Uttar Pradesh, speculate that the family buried their loved ones by the river either because there was not enough space at the local crematorium or because they could not afford wood for the cremation, Al Jazeera News reported early. this week.
An official letter from the Indian government, seen by Reuters and reported on May 15 yesterday, said that officials knew that Covid-19 victims from underprivileged families were dumped in a number of Indian rivers, including the Ganges river.
The image of a corpse washed up in the Ganges river, considered sacred by Hindus, has shocked India reeling under the world's worst wave of infections.
Although the media have attributed the recent increase in the number of bodies to the pandemic, the northern state of Uttar Pradesh, home to 240 million people, has yet to disclose the cause of death publicly.
"The government has information that the bodies of those who have died from COVID-19 or other diseases are dumped into rivers instead of being disposed of according to proper rituals," said a senior state official, Manoj Kumar Singh, in a letter to district chiefs dated May 14 reviewed by Reuters. .
As a result, bodies were found from rivers in many places.
Singh confirmed the letter to Reuters but said autopsies on four to five bodies in the state's Ghazipur district did not reveal viral infection.
"The body is rotten, so I am not sure that in this situation it will be known to be positive for corona," he said.
For the people of India, river water is believed to have purifying powers.
"We live in fear. Dogs eat their bodies and bones and flesh where we live. And the government is doing nothing," a local resident told the Telegraph.
The number of bodies found in and along the riverbanks has not been confirmed, as local authorities have not made it public, but other residents living in Dongri village said an average of 40 bodies were carried along the riverbanks to be buried or abandoned.
The mystery surrounding the corpses has not been resolved, nor is it known how many have contracted the coronavirus. But many believe the family took extreme measures because they were unable to cremate their relatives, a funeral ritual that could have cost around US $ 70 (Rp. 1 million) but has skyrocketed to US $ 400 (Rp. 5.7 million) since late last month. , locals said, as the second wave of Covid-19 hit India like a tsunami, the Washington Post reported.
The gruesome image of the floating and half-buried corpses prompted government officials to act. Patrol boats have been sent up and down the Ganges, which meanders 2,400 km across northern India.
Days after the National Mission for Clean Ganges (NMCG) requested a detailed report from the Uttar Pradesh government, the state government has begun compiling district-level data from unidentified or unclaimed bodies recovered from Ganges across the state, News18 reported.
Achchhe Lal Singh Yadav, Additional Project Director, Uttar Pradesh State Mission for Clean Ganges (SMCG) has written to 72 district judges requesting a report on the number of unidentified bodies dumped on the banks of the Ganges river and its tributaries, to be cremated according to Standard Operating procedures and guidelines.
District judges have also been asked to send reports on infrastructure audits for crematoriums or cemeteries. They were also asked to stop dumping or burying unidentified corpses or bodies into the river or riverbank of the Ganges.