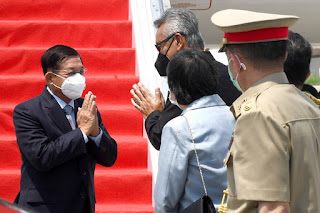 UMMATIMES - The military in power in Myanmar has decided not to approve the visit of the Southeast Asian envoy until it can build stability, Friday (7/5). The junta is currently prioritizing national security and stability.
"Only after we have achieved a certain level of security and stability will we cooperate on the envoy," spokesman for the military council, Major Kaung Htet San, said in a televised briefing.
Leaders of countries in the Association of Southeast Asian Nations (ASEAN) reached consensus at a summit on the Myanmar crisis last month. The event was also attended by the architect of the February 1 coup, Senior General Min Aung Hlaing.
The outcomes of the meeting included an end to violence, dialogue between the military and its opponents, permitting humanitarian assistance and allowing the visit of a special ASEAN envoy. However, the statement rejects the expected visit and will only consider the suggestion aiding his vision for the country.
Kaung Htet San said ASEAN leaders had given positive suggestions to Min Aung Hlaing. However, whether or not a consideration follows depends on the situation in Myanmar.
Myanmar has been in turmoil since the coup, sparking outrage among the public that is unwilling to tolerate a return to military rule after five decades of economic mismanagement and underdevelopment. Protests and marches have taken place on an almost daily basis, the latest major pro-democracy demonstrations on Friday in the commercial capital Yangon. Smaller potes in at least 10 other places around the country.
Some 769 people have died and nearly 3,700 have been detained in the military crackdown on opponents. The junta says it is fighting terrorists. Kaung Htet San said more incendiary arrests had been made than was publicly announced.
Kaung Htet San said violence and armed conflict would be handled by the military in an appropriate manner. One of the actions taken by still restricting access to information.
The junta has for months restricted access to the internet in a bid to disrupt the anti-coup movement and this week banned outside broadcasts of satellite television. Kaung Htet San said the military respects the public's right to access information, but social networks based abroad are being used to share material that is deeply concerned about national security.