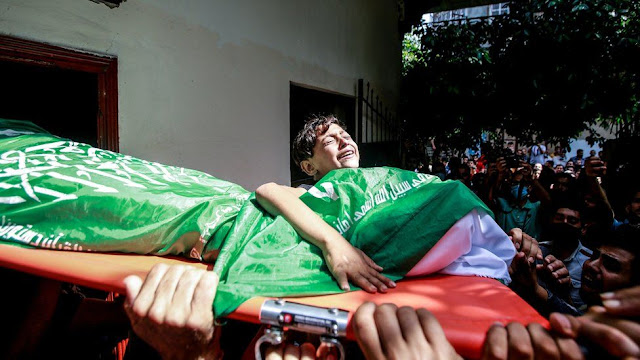 UMMATIMES - Mohammad Saad was so shocked to hear the news of the death of his cousin, Reema Saad. He said the news was like a "lightning strike" for the family.
Reema is one of the residents in Gaza, Palestine who was the victim of an Israeli air strike on the day of Eid. She and her husband, Mohammed Telbani and two children were hit by a devastating explosion in their apartment in Tel al-Hawa in the early hours of Wednesday (12/5).
According to Mohammad, Reema and his first child named Zeid died when the Israeli air strikes were launched. Meanwhile, her husband, Telbani, died after being treated in the intensive care unit due to his injuries and the daughter, Maryam, who is still three years old, has yet to be found.
"I communicated with the fire department and civil defense crews in Gaza to help us find Maryam," said Mohammad, quoted by Aljazirah, Friday (14/5).
A day before the Israeli airstrikes on Gaza, Mohammad said Reema visited his family to congratulate him on his brother's engagement some time ago. Until now, the family is still hiding the news of the passing of Reema and Telbani, as well as their son, from Telbani's mother, for fear that he might suffer a heart attack.
Since Israel launched its airstrikes on the Gaza Strip earlier this week, the Palestinian Ministry of Health has reported that at least 103 people, including 27 children, have been killed and 580 injured. Meanwhile, seven Israelis including a child have been killed in a rocket attack launched by Hamas, a Palestinian political faction.
In recent days, tensions between Israel and Palestine have escalated, fearing the situation could lead to a full-scale war. The conflict between the two sides has been heating up since May 10, which was triggered by riots at the Al-Aqsa Mosque, East Jerusalem.
At that time, Israeli security forces stormed congregants who were performing tarawih prayers towards the end of Ramadan. Video footage circulating on Tuesday (11/5) shows how officers directly fired tear gas and stun grenades, injuring many Palestinian worshipers.
Mohammad's story is one of many similar grief stories that Palestinians experience today. When Muslims around the world were supposed to welcome Eid al-Fitr 1442 H which fell on Thursday (13/5) yesterday with joy, this was not felt by them there.
The gardens, which are usually filled with families celebrating Eid al-Fitr, are deserted. Instead of celebrating joys and gatherings for family and friends, many Palestinians must see funerals being held.
In Gaza, many mourners were seen carrying the bodies from the Al-Omari Mosque on Thursday (13/5) morning to the cemetery in the eastern end of the city. Throughout the procession, the sound of bombarding air strikes and rocket fire was heard almost continuously.
Due to the tense situation, not a few Palestinians offered their condolences to one another over the phone. Several residents have also shared news of their family members who lost their lives in Israeli air strikes on social media.
Bayan Abu Sultan, is one of the Palestinians who told me that his cousin Hadeel Arafa and his aunt named Miami were killed while preparing for Eid at their home in the Amal neighborhood in Khan Younis, during an Israeli air strike.
The attacks hit Hadeel and Miami's homes at around 3:00 p.m. local time on Wednesday (12/5). There was no advance warning of the imminent attack because the Miami brothers were on the phone minutes before the bombing.
Abu Sultan said that he and Hadeel planned to go shopping together after Ramadan because his cousin was getting married a few days after Eid. He said the four of Hadeel wrote a status on Facebook, praying for Palestinians who must lose their lives in this attack.
“I get chills every time I think about how scared people are in the current situation. I hope they don't feel anything, ”explained Abu Sultan.
Israeli air strikes have hit police and government buildings, three-storey buildings, an ice cream factory in eastern Gaza and the Al-Salah school in Deir Al-Balah in the central region of the Gaza Strip.
On Wednesday (12/5), Israeli air strikes destroyed the al-Shorouq tower, which houses media organizations. Its ruins cover Remal Street, Gaza City's busiest shopping street. The Israeli military says it is only targeting multi-storey buildings that are military targets and other buildings are sites of strategic importance belonging to Hamas.
However, according to the Euro-Mediterranean Human Rights Monitor (EMHRM) report, Israeli bomb attacks broadly cover civilian objects without respecting the principle of proportionality. Israeli forces are also said to have expanded the response to include the targeting of dozens of civilian objects, women, children and densely populated gathering locations, which under the Rome Statute constitute war crimes.