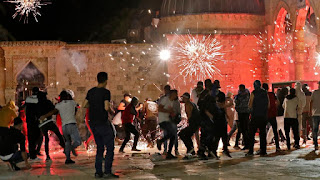 UMMATIMES - The Turkish government has criticized Israel and accused it of terrorizing Palestinians in the recent clashes. Israel's alleged terror was carried out when Israeli police fired rubber bullets and stun grenades at Palestinian youths at Jerusalem's al-Aqsa mosque on Friday night.
According to Alarabiya English, clashes at Islam's third holiest site and around East Jerusalem injured 205 Palestinians and 17 police officers. The clashes come amid growing anger over the potential eviction of Palestinians from their homes on land claimed by settlers.
As the clashes flared, some Turkish officials criticized Israel and called on other countries to voice criticism. The Foreign Ministry urged Israel to immediately end its provocative and hostile attitude.
"Israel should be ashamed and those who have remained silent in the face of this shameful attack," Turkish Presidential Spokesman Ibrahim Kalin said on Twitter late on Friday.
"We ask everyone to resist the occupation policy and aggression of this apartheid state," he added.
Turkish communications director Fahrettin Altun told state television that Israel violates human rights and will pay the price. Because the opposition parties echo government condemnation in a rare sign of unity.
"Attacking an innocent person who is praying is clearly terror," Altun said.
"We see that this attack on the Palestinian people contradicts the most basic human rights," he added.
Turkey and Israel have experienced bitter strife in recent years despite strong commercial ties. They also expelled each other's ambassadors in 2018.
Ankara has repeatedly condemned Israel's occupation of the West Bank and its treatment of Palestinians. Turkey calls the problem a "red line".
Last month, Turkey also condemned what it said was Israel's "systematic attempt to expel Palestinians", referring to a long-running legal case to be held by Israel's Supreme Court on Monday.