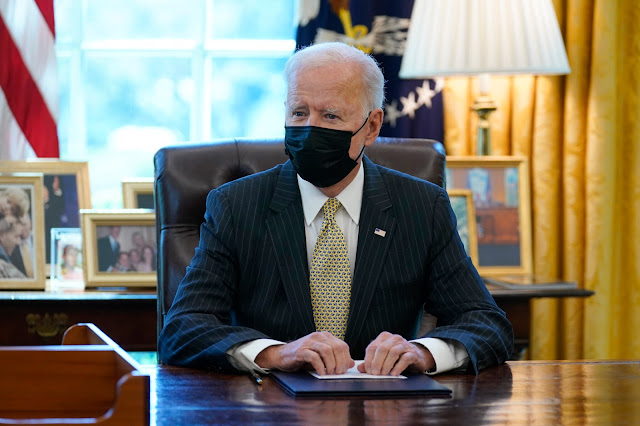 UMMATIMES - United States President Joe Biden promised humanitarian assistance and reconstruction for Gaza, which the Israeli military continues to bombard in the past 11 days.
Biden, appearing briefly at the White House after news of the ceasefire agreement, also promised to replenish Israel's Iron Dome missile defense system, despite complaints from Democrats about pending United States arms sales to Israel.
Biden said the United States would work through the United Nations and other international stakeholders to provide humanitarian assistance quickly.
"And garner international support for the people in Gaza and the reconstruction effort," he said.
He insisted that reconstruction assistance would be provided in partnership with the Palestinian Authority and not with Hamas, which the United States calls a terrorist organization.
The Palestinian Authority, run by moderate President Mahmoud Abbas, only governs part of the occupied West Bank, while Hamas holds power in the Gaza Strip.
"We will do this in full partnership with the Palestinian Authority - not Hamas - in a way that does not allow Hamas to replenish its military arsenal," Biden said.
State Department spokesman Ned Price said Foreign Minister Antony Blinken would travel to the Middle East region in the coming days to meet with Israeli, Palestinian and regional counterparts to discuss recovery efforts and "work together to build a better future. for Israel and Palestine. "
The ceasefire agreement follows days of intense diplomatic activity that has put a test on the ability of Biden and his national security aides to help resolve a conflict that could turn into a protracted war.
During the negotiations, Biden spoke with two leaders with whom he has strained relations - six times with Israeli Prime Minister Benjamin Netanyahu, including twice on Thursday, and once with Egyptian President Abel Fattah al-Sisi.
Both Netanyahu and Sisi are close to Donald Trump. Biden waited weeks to call Netanyahu after taking office as US president.
His phone call with Sisi on Thursday was the first time they spoke since Biden took office in January.
Egypt, which has peace treaties and diplomatic relations with Israel and also maintains contacts with Hamas, has traditionally played a key role in putting down fighting in Gaza.
The absence of direct communication between the two presidents to date has been widely seen as an insult to Sisi by the new administration which has made clear his concerns about Egypt's human rights record.
When the conflict started, the government was careful not to make public demands on Israel for fear Israel would ignore US calls and prolong the conflict, said a source familiar with the negotiations behind the scenes.
The United States had the impression, five or six days ago, that Israel was preparing to start a phase of decline after destroying most of the Hamas targets it had set for attack, the source said.
At that point, senior US officials from Biden began to press Israel more strongly for de-escalation and a ceasefire, the source said.
On Thursday, Israel signaled to Biden officials its readiness for a ceasefire, the source said.
The United States alerted Egypt, which alerted Hamas. The Islamist militant group later informed Egypt of its readiness for a ceasefire, and Egypt alerted the United States.
Egypt's main interlocutor is Cairo's intelligence chief, the source said.
Whether the ceasefire will last is a major concern, with the United States making no guarantees given fears of more random rocket attacks and other tensions between Israel and Palestine, the source said.