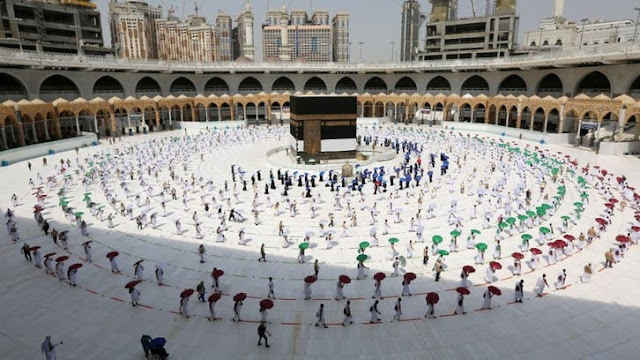 UMMATIMES - The Saudi Arabian government has officially opened Hajj registration for local citizens and expatriates. Although the available quota is only 60 thousand, on the first day of opening more than 450 thousand people registered.
This is recorded in an electronic portal for domestic pilgrims launched by the Saudi Ministry of Hajj and Umrah. Of the hundreds of thousands of registrants, 60 percent of the congregation is male and 40 percent female, as quoted from Arab News, Wednesday, June 16, 2021.
Abdulfattah Mashat, deputy minister of hajj and umrah, said the government only allowed those over 18 to perform hajj. In an interview on the Al-Ekhbariya TV channel, Mashat said children would not be included in the group receiving the vaccine and would not be allowed to enter the site.
Priority will be given to people over 50 years of age who have never performed Hajj.
Among applicants for this year's Hajj is a 25-year-old senior Saudi cultural and engagement officer at Bupa Arabia's company, Mohammed Gamlo. He had doubts that the government would hold the pilgrimage this year.
"I was very happy when the ministry made the announcement and I told myself I should be the first to register," he said.
On Tuesday, the ministry shared an image on Twitter showing the completion of the first phase of lodging distribution for domestic pilgrims.
The ministry's preparations will continue until this weekend, in accordance with health requirements and standards to maintain the quality of services provided to pilgrims. Registration of domestic pilgrims must be completed by June 23.