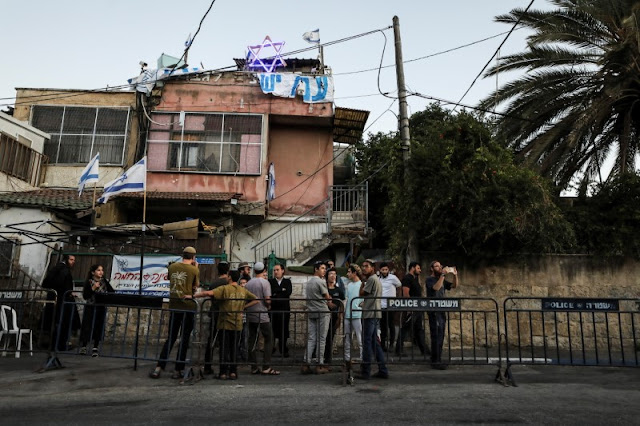 UMMATIMES - Palestinians living in the Sheikh Jarrah settlement are barricaded from entering and leaving their homes.
On Othman Ibn Afan Street, 15-year-old Palestinian student Tala Abu Diab, twice a day, has to hand over her papers to armed Israeli police stationed 24 hours a day at roadblocks at both ends of the road, waiting for permission to leave and return from her home.
"Our life is not an ordinary life anymore, I can't go out to see my friends and they can't come in to see me either," Abu Diab said, quoted by Reuters, June 17, 2021.
"If they let my friends in, which they rarely do, they stay for 30 minutes before the clashes start...so my friends have to leave the neighborhood. It affects me, I don't see anyone else except family members, " he said.
Israeli police say the roadblocks and restrictions are to prevent friction between Palestinians and Israeli settlers, who have moved into several houses on the street.
The barrier was upgraded to concrete after a Palestinian motorist hit it at high speed a month ago. He was shot dead by the police stationed there, six of whom were injured.
As the political and court drama played out, Abu Diab said he and his brother felt increasingly confined to the street.
"It affects my mental health," said Abu Diab, whose school is 15 minutes away. "If I leave, they (the Israeli police) harass me and when I come back, they harass me. It's very difficult."
The tension stems from a long-running dispute in which Jewish settlers attempted to steal the homes of Abu Diab and others in a case that has attracted international attention and near-daily protests.
An Israeli court ruled in October in favor of Israeli settlers' claims that Palestinian families live on land that once belonged to Jews in territory that Israel captured in the 1967 war and then annexed in a move not recognized internationally.
Palestinians, questioning the legitimacy of the settlers' documents, have appealed the ruling. Israel's Supreme Court will hear Sheikh Jarrah's case on August 2.