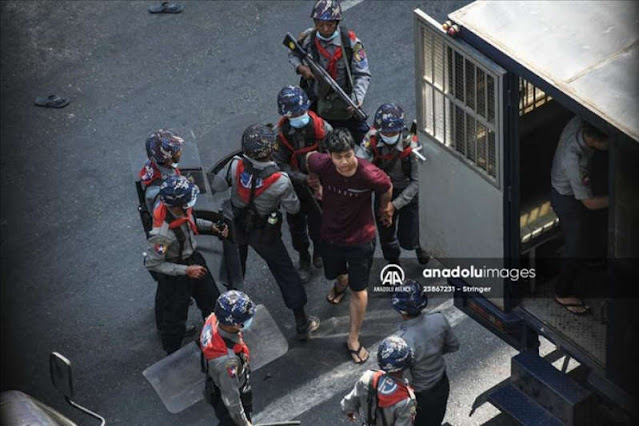 UMMATIMES - Activists urged companies to stop business transactions and the flow of money to the Myanmar military, as one of the steps to achieve peace in the country after the military coup.
The founder and chairman of The Advisory Board Progressive Voice, Khin Ohmar revealed that at least there are companies from Vietnam, Thailand, Malaysia and Indonesia that are still doing business with the Myanmar military after the coup.
"We call on ASEAN members to comply with their international obligations under the UN Guiding Principles on Business and Human Rights and stop financial flows to the junta," Khin said in an online discussion Thursday.
The Myanmar activist also asked ASEAN to encourage the UN Security Council to implement an arms embargo against Myanmar. According to Khin, ASEAN needs to start taking concrete steps to regain the trust of the Myanmar people.
The same thing was conveyed by an Indonesian human rights advocate and Head of the UN Human Rights Council's Independent International Fact-Finding Mission in Myanmar, Marzuki Darusman. Marzuki believes that the international community needs to implement an arms embargo, which he believes will deal a crushing blow to the Myanmar junta.
Marzuki also encouraged the international community to flag companies that were still doing business with the Myanmar junta after the military coup. In addition, Marzuki suggested that ASEAN recognize the National Unity Government (NUG) in order to create an equal level in the dialogue process with other related parties later.
The NUG was formed by opponents of the February 1 military coup, including deposed MPs and ethnic minorities. "Member countries (ASEAN) must take the lead in trying to open a dialogue space in Myanmar, which means recognizing the NUG is the way forward," said Marzuki at the same event.
Myanmar was rocked by a military coup on February 1 that toppled the elected government of Aung San Suu Kyi. The military argued that the election that led to Suu Kyi's election with the most votes was full of fraud. As of June 16, 2021, the Associated Association for Political Prisoners (AAPP) reported junta forces had killed 865 people since the military coup.