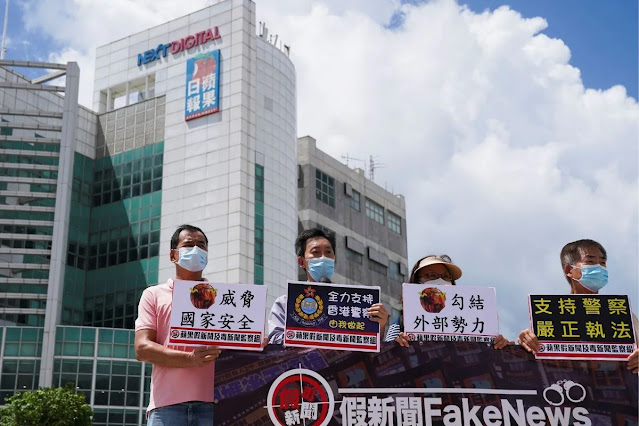 UMMATIMES - Hong Kong police arrested five executives of the Apple Daily newspaper on Thursday (17/6). For the first time Hong Kong police have a warrant to confiscate journalistic material under national security laws.
Police deployed 500 officers to raid the offices of Apple Daily. Police said the media articles in the newspaper had violated security laws. Police said the warrant was aimed at gathering evidence, including from journalists' phones and computers. This action has raised concerns about media freedom.
Police said Apple Daily published dozens of reports since 2019 that may have violated security laws. The law is not retrospective, but prosecutors can use the measure as evidence.
"The nature of the article is very simple: inciting, asking foreign countries to impose sanctions on Hong Kong and the People's Republic of China. Very straightforward," senior watchdog Li Kwai-wah told reporters outside the newspaper's headquarters.
Li said police had also frozen HK$18 million in assets owned by three companies linked to Apple Daily. Li said the raids were not targeted at the media industry as a whole.
"This is a blatant attack on the editorial side of Apple Daily," Mark Simon, an adviser to Lai based out of Hong Kong, told Reuters. "They caught the top editors," he said.
It was the second time police raided the headquarters of Apple Daily. Last year, as many as 200 police officers raided the offices of Apple Daily and arrested media tycoon and Apple Daily owner Jimmy Lai on suspicion of colluding with foreign forces.