The Covid-19 pandemic has had a significant impact on ASEAN integration plans. For this reason, in preparing the work plan for the integration initiative (2021-2025), the ASEAN Secretariat also focuses on the effects of the pandemic. 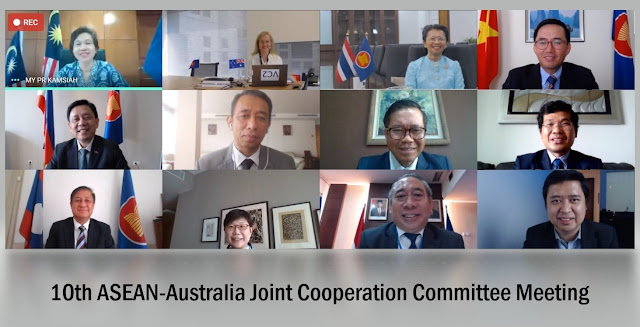 UMMATIMES - "The pandemic has had a significant detrimental effect on the region, so the work plans prepared must respond to these effects," said Intani Kusuma, Senior Officer of the Initiative for ASEAN Integration and Reducing Development Gaps at the ASEAN Secretariat.
Intani conveyed this when filling a virtual guest lecture held by Paramadina Graduate School of Diplomacy (PGSD), Paramadina University, Jakarta, Saturday (19/6). The event was titled "ASEAN's efforts in narrowing the development gap among ASEAN member countries".
In this activity, the Head of the Center for Intermestic and Diplomatic Engagement (CIDE) who is also a PGSD lecturer, Anton Aliabbas, acted as the discussion discussant. The event was also attended by the Vice Chancellor of Paramadina University Handi Risza, Director of PGSD Shiskha Prabawaningtyas, and Head of the International Relations Study Program Tatok Djoko Sudiarto.
According to Intani, so far ASEAN has grown as the number five economic power in the world. Therefore, the ASEAN Secretariat has expanded new initiatives in response to the impact of the pandemic.
In the field of health services, for example, there is the provision of technical support and capacity building in rural areas. Especially for rural residents in Cambodia, Laos, Vietnam, and Myanmar.
The prepared project design aims to support the reduction of the development gap and always refers to the agreement of the leaders of ASEAN member countries. "Digital adoption for health security, including assistance in the development of a national health framework, especially the issue of malnutrition, has received special attention," said Intani.
On the same occasion, Anton said the rapid development of countries in the region had an impact on the ASEAN integration plan. This is because the development that occurs in the area is not evenly distributed so that it has the potential to trigger regional disintegration.
"If it is not handled seriously, the absence of regional policies in responding to the problem of horizontal imbalance will increase the complexity of problems in the region," said Anton.
For this reason, he hopes that ASEAN member countries can immediately strengthen the role and authority of the ASEAN Secretariat. This is because strengthening institutional mechanisms is increasingly needed in accelerating programs to reduce development disparities in ASEAN.
Although, he continued, the ASEAN Secretariat still had to improve the working mechanism of the internal bureaucracy that prioritized collaboration between divisions. Given that development issues are transsectoral.
"Without strengthening the role of the ASEAN Secretariat, the program prepared to close this development gap will not be able to run effectively," said Anton.
When closing the activity, PGSD Director Shiskha Prabawaningtyas emphasized the importance of the ASEAN Secretariat involving the media in pushing the ASEAN integration agenda. Because, according to him, so far the media has not paid too much attention to this issue.
"Cooperating with the media will be strategic in order to participate in mainstreaming ASEAN's role in narrowing the gap in the economic conditions of member countries, not only political security issues," said Shiskha.