Backed by Allies, Biden is ready to be more confrontational with Putin 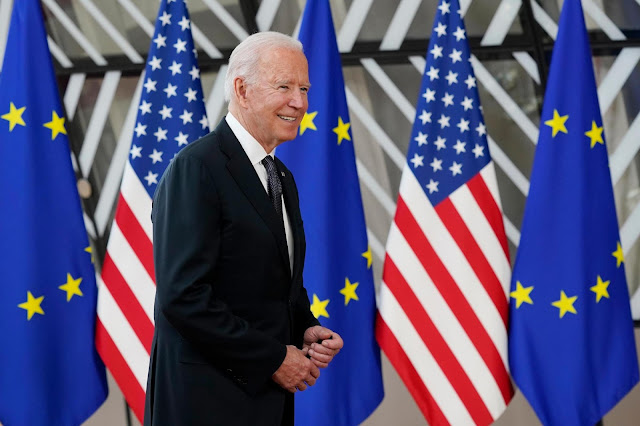 UMMATIMES - After receiving support from allies, US President Joe Biden declared he was ready to be more confrontational with Vladimir Putin. Biden will meet face-to-face for the first time with the Russian president on Wednesday (16/6).
The meeting between the two heads of state is predicted to be difficult. The closed-door meeting comes after Biden made his first foreign trip as president to Europe.
In Geneva, Switzerland he strengthened ties with US allies to confront Russia and China. Shortly after getting off his plane back from Geneva, reporters asked Biden if he was ready for Wednesday's meeting. "I'm always ready," said Biden, Tuesday (15/6) yesterday.
Prior to Geneva, Biden met with leaders of the Group of Seven (G7) rich countries, NATO, and attended the US-EU meeting. He delivered a series of joint statements expressing concern about Russia and China.
While meeting with the European Union on Tuesday, he announced a breakthrough to loosen the impasse over the dispute over the sale of US aircraft.
The US and the European Union said they were "unifying the principles of their approach, to respond appropriately to the repeated negative behavior and harmful activity of" their longtime rival Russia.
Biden's trip to Europe aims to repair the US partnership that was damaged during the administration of former president Donald Trump. The Republican politician welcomed what US intelligence agencies called Russia's intervention in the US election and praised Putin and the authoritarian leader he said was strong.
Earlier this year Russia expressed anger that Biden said he considered Putin a 'murderer'. There is no scheduled lunch or dinner at the meeting of the two heads of state this Wednesday.
In addition, there is also no schedule for a joint press conference in the meeting which is expected to run for four to five hours. This condition is very different from the G7 meeting where the host UK Prime Minister Boris Johnson welcomed his guests with a barbeque party and group photos.
A US administration official, speaking on condition of anonymity, told the Biden-Putin meeting Washington was hoping for a deal in a number of small areas. Like relocating US and Russian ambassadors to Washington and Moscow.