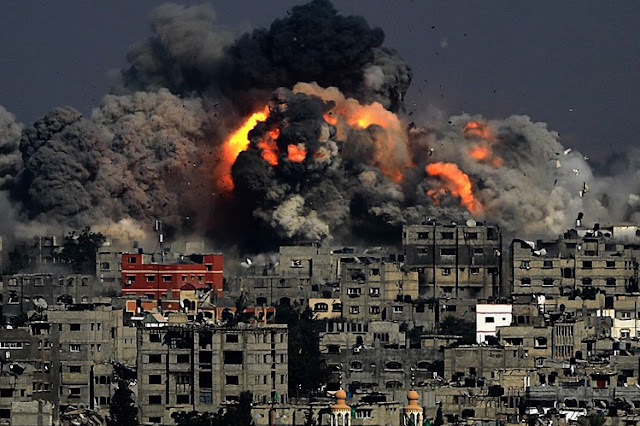 UMMATIMES - Less than a month after the ceasefire agreement was agreed, the Israel Defense Forces (IDF) again attacked the Gaza Strip, Palestine, Wednesday, June 16, 2021, evening local time. As if it didn't care about the deal, Israel said it was ready to go back to fighting against Palestinian Hamas fighters.
According to a report quoted by VIVA Military from Reuters, a number of Israeli Air Force (IAF) fighter jets bombarded the residential complex of civilians. The Israeli military claimed that the area that was the target of the attack was a weapons warehouse for Hamas fighters.
The Israel Defense Forces said the military action was taken in response to the launch of explosive-laden balloons sent by Hamas fighters.
After attacking the settlements of Palestinian civilians, the Israeli military said it was ready to face armed confrontation with the Palestinian militia.
On the other hand, Hamas fighters send explosive-laden balloons to Israeli territory, not without reason. The actions of Israeli nationalists who marched in Gaza made Palestinians angry.
As is known, Israel is deploying its military and police forces to forcibly evict Palestinian settlements. Until now the annexation of the Gaza area is still ongoing, and even more and more Palestinians are being expelled from their own homeland.
Israel and Palestinian Hamas have only about three weeks agreed to a ceasefire. Precisely on May 10, 2021, the Israeli military and Palestinian Hamas fighters were involved in an armed conflict for 11 days.
Hamas troops fired thousands of rockets into several areas of Israel, in retaliation for the barbaric actions of the Zionist state police at Al-Aqsa Mosque. A number of Israeli police suddenly entered the mosque and beat Palestinians who were carrying out Tarawih prayers.
Until this news was published, there was no official data regarding the victims and the damage caused. The Palestinian Hamas party has also not provided information, after the Israeli military launched air strikes again.