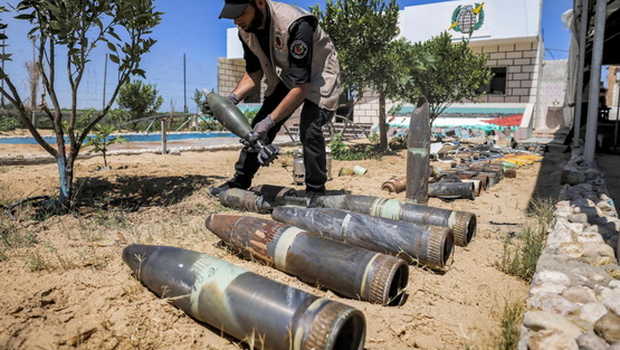 UMMATIMES - Bomb disposal troops in Gaza, working without adequate protective equipment. Not even the most basic protective equipment such as a protective vest is owned.
On May 19, an Israeli missile strike ripped through the roof of the Muhareb family's home in Rafah, in the south of the besieged Gaza Strip. Two minutes later, an Israeli warplane dropped another missile, which hit two floors of the house, but somehow did not explode.
"My brother and his family, who live on the second floor, were all injured by reconnaissance missiles," Waseem Muhareb said.
"My four-month-old baby was in a coma for two days, and my eight-year-old niece Layan was in the intensive care unit for 10 days with burns all over her body," Waseem said.
Muhareb's extended family home, housing 36 adults and children, was destroyed. The second missile had hit one of the children's bedrooms before landing on the first floor.
"No warning," said Waseem, whose family is now living in rented accommodation nearby. "The whole ordeal happened within three minutes," he said.
The next day, the bomb disposal squad arrived and removed the unexploded ordnance, as well as the remnants of the recon projectiles. The force, which operates under the Interior Ministry, has carried out 1,200 missions to neutralize, defuse and destroy unexploded warheads and dangerous munitions in Gaza's residential areas since May 10.
Rockets fired by armed groups in Gaza have killed at least 13 people in Israel. Hamas and Israel agreed to a ceasefire on May 21.
The Gaza bombings caused widespread infrastructure damage, including the destruction of 1,800 housing units, 74 public buildings, 53 educational facilities, and 33 media offices. Damage to water desalination plants has also left more than 250,000 Palestinians without clean drinking water.
Captain Mohammed Meqdad, an explosives engineer at Gaza's interior ministry, said that 70 bomb disposal squads had not been injured during their work since May 10, despite the shortage of vital protective equipment.
"The team did not have protective vests or high-tech equipment that could reveal the presence of explosives," Meqdad said. "They only have simple equipment, like the toolbox that can be found in almost every home," he said.
Meqdad said that the entry of protective equipment used by bomb disposal teams in Gaza has been prohibited since the blockade of Gaza 13 years ago. Therefore, the main risk associated with work during an Israeli attack is the possibility that the team could be targeted.
"The second risk is the types of ammunition that Israel drops, how dangerous they are, and whether the technicians assigned to them can measure them with basic equipment at their disposal," Meqdad said.
The final step in the process of collecting and neutralizing unexploded ammunition, is to transfer it to a central warehouse, located in Rafah, in preparation for its destruction.