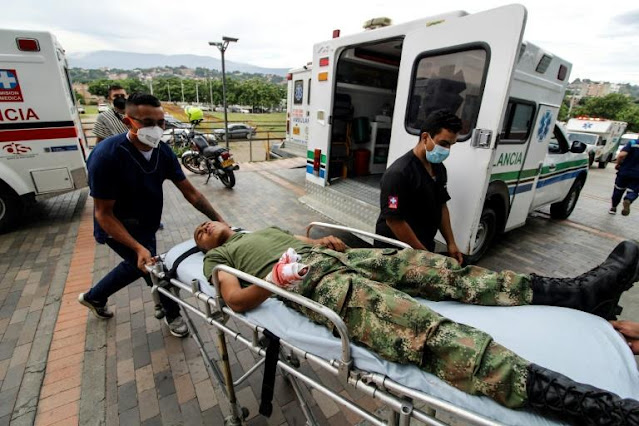 UMMATIMES - A car bomb exploded at a military base in Cucuta, a city in the Colombian border region on Tuesday (15/6). A total of 23 people were reported injured in this incident.
According to TRT, the base is used by the 30th Army Brigade in the northeastern region of Colombia, which lies near the border with Venezuela. Authorities have not officially confirmed the number of victims. However, initial reports said the victims included military personnel and civilians.
A source who is a Colombian official said the death toll was not likely to be too large because most of the military personnel were not at the scene. Many of them are currently still in the isolation period imposed to prevent the transmission of a new type of corona virus infection (Covid-19).
"Due to a vehicle explosion inside the 30th Army Brigade in Cucuta, I have instructed Defense Minister Diego Molano to go into the city and carry out an investigation that will allow us to clear up this sad situation," Colombian President Ivan Duque said on Twitter. .
Molano said he would soon head to Cucuta to see firsthand what was happening. Colombia's Interior Minister Daniel Palacios called the incident a "cowardly terrorist attack".
Despite the 2016 peace deal with the rebel Revolutionary Armed Forces of Colombia (FARC), the Colombian military continues to fight National Liberation Army (ELN) guerrillas, criminal organizations and former FARC members who reject the deal.
The ELN, FARC dissidents and criminal organizations are all in the sometimes turbulent province of Norte de Santander, where the 30th Brigade operates. However, no armed group has yet claimed responsibility for the attack.
The Colombian government once blamed FARC dissidents for a March car bomb attack in Cauca province that left more than 40 people injured.