Bung Karno and His Resistance to Israel's Barbarity 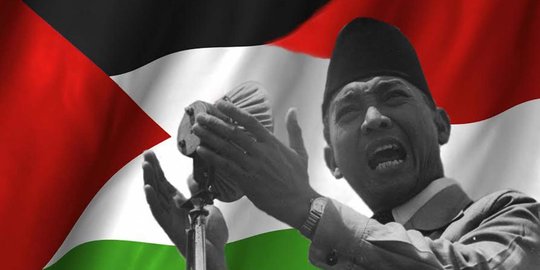 UMMATIMES - President Sukarno or Bung Karno, who always defended the struggle of the oppressed nations, was known to be very persistent in defending the struggle of the Palestinian people.
In 1962, when the Asian Games were held in Jakarta, he refused the presence of the Israeli contingent. Jakarta was forced to face the consequences of the International Olympic Committee (IOC) withdrawing as protector of AG IV.
In fact, the IOC forbade its flag to be flown in Jakarta. At its peak, Indonesia left the IOC. A year later, Indonesia hosted Ganefo (Games of the New Emerging Forces) in Jakarta, which was a huge success and was attended by 48 countries.
Previously (1957), when the PSSI team qualified in the Asian zone and only had to face Israel to participate in the World Cup, Indonesia refused to play in Jakarta or in Tel Aviv. Indonesia only wants to play in a neutral venue, without the national anthem. But the world football union (FIFA) rejected RI's proposal.
As a result, Indonesia was hampered to the World Cup. When Indonesia left the United Nations on January 7, 1964, one of Bung Karno's reasons was, "By benefiting Israel and harming Arab countries (including Palestine), the United Nations has actually benefited imperialism and harmed the independence of nations."
Bung Karno, who accused the UN of being an arm of the US and its allies, called the UN worse than a pulpit of bullshit. What was stated by the first president of Indonesia 40 years ago has now become a reality.
When there is an Israeli aggression against Palestine today, the United Nations only calls for Israel to withdraw from Palestine. And when this call was ignored by Israel, the United Nations was silent a thousand languages. However, this world body has not only provided support to the US to attack Iraq, it has even imposed an economic and trade embargo on Iraq since 1991.
Regardless of the consequences of this embargo, hundreds of thousands of Iraqis, including children, died from malnutrition. As in Iraq, the UN did not care when US troops with its blessing attacked Afghanistan, many innocent civilians were victims. Today, the United States in an effort - which they call fighting terrorists, does not hesitate to punish countries it does not like. Bung Karno himself had confirmed the existence of such a threat.
"The imperialists," said Bung Karno, "most like to call themselves 'civilized'. They most like to think of us as 'savages', so they have to come with their troops to teach us 'civilization'. In teaching 'civilization' ' to us, they don't love wealth and don't love things. And if we are 'stubborn' then they will bomb us: in Maluku, Cambodia, Laos, and Cuba.
At this time, apparently the most 'stubborn' nation of Vietnam. So that this nation is bombarded every day, every minute, and every second by the bearers of the 'holy mission' from Washington. If the 'holy mission' failed miserably, it would be wrong, he said, yes, the 'barbarians'." According to Bung Karno, "The imperialists will never allow Sukarno's type of independence, Norodom Sihanouk (Cambodia), Mao Tse Tung (PRC). ), Boumedienne (Algeria), Jamal Abdel Nasser (Egypt) and Nkrumah (Ghana)."