Dozens of Israeli settlers storm the Al-Aqsa compound in Jerusalem

Dozens of Israeli settlers forced their way into the al-Aqsa Mosque compound in occupied East Jerusalem on Monday (21/6). 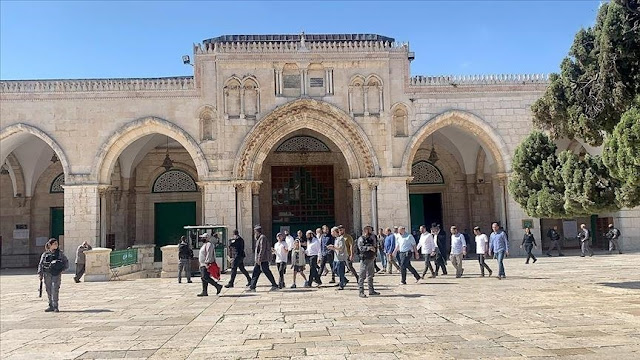 UMMATIMES - The Department of Islamic Endowments in Jerusalem said in a statement that 56 settlers entered the compound under the protection of Israeli police.
It is expected that more settlers will enter the site in the future.
Israeli settlers stormed the compound every day except weekends, Friday for Muslims and Saturday for Israelis.
Israeli police began allowing settlers into the compound in 2003, despite repeated criticism from Jerusalem's Department of Islamic Endowments.
For Muslims, Al-Aqsa is the third holiest site in the world after Mecca and Medina. While Jews refer to the area as the Temple Mount, where two Jewish temples stood in ancient times.
Israel occupied East Jerusalem, where Al-Aqsa is located, during the 1967 Arab-Israeli War and annexed the entire city in 1980, a move never recognized by the international community.