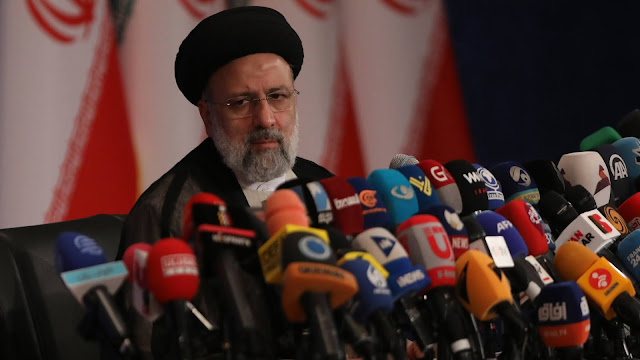 UMMATIMES - Ebrahim Raisi, 60, a hardline Western critic, will take over from moderate president Hassan Rouhani in August as Iran seeks to salvage the stalled Iran nuclear deal and remove US sanctions that have crippled Iran's economy.
Raisi said Iran's foreign policy would not be limited to the nuclear deal.
"Iran wants to interact with the world... My government's priority is to improve relations with our neighbors in the region," he said at his first press conference in Tehran, broadcast by state media, since winning Friday's election, Reuters reported, June 21, 2021.
But he called on Saudi Arabia and its allies to immediately stop their interference in Yemen. A Saudi-led military coalition intervened in the Yemen war in 2015 after the Iran-backed Houthi group drove its government out of the capital Sanaa. The conflict has been largely stalemate for several years.
Iranian President Hassan Rouhani and Iran's President-elect Ebrahim Raisi speak to the media after their meeting in Tehran, Iran June 19, 2021. Iranian President Hassan Rouhani who resigned on Saturday (19 June) congratulates hardline judge Ebrahim Raisi, who won a landslide victory in the election Iranian president. [Iran Presidential official website/Handout via REUTERS]
Iranian and Western officials say Raisi's election is unlikely to change Iran's negotiating stance in talks to revive the nuclear deal, as Iran's Supreme Leader Ayatollah Ali Khamenei already has the final say on all major Iran policies.
Raisi further said the United States had violated the agreement and the European Union had failed to fulfill its commitments.
"I urge the United States to return to its commitments to the deal... All sanctions imposed on Iran must be lifted and verified by Tehran," he said. Asked if she would meet with US President Joe Biden if the sanctions were lifted, Raisi simply replied "No".
Negotiations have been ongoing in Vienna since April to find out how Iran and the United States can return to compliance with the Iran nuclear deal, which the US abandoned in 2018 under then-President Donald Trump and then reimposed sanctions on Iran.
Iran then violated the limits of the uranium enrichment deal, which was designed to minimize the risk of developing a potential nuclear weapon. Iran has long denied having any such ambitions.
Ebrahim Raisi said Iran's ballistic missile program was non-negotiable, despite demands by Western and Gulf Arab states for it to be included in ongoing talks to revive the nuclear deal.
"Regional and missile issues are non-negotiable. They (the United States) did not abide by the previous agreement, how do they want to enter into new discussions?" Raisi said.
Raisi has been under US sanctions in the past, according to the United States and human rights groups, for his involvement in the extrajudicial killings of thousands of political prisoners in the Islamic Republic of Iran in 1988.
In her remarks on Monday, Raisi said she should be rewarded for defending the rights and security of her people.
Ebrahim Raisi said as a legal expert, he has always defended human rights, adding that US sanctions against him for alleged human rights violations had been imposed on him for doing his job as a judge.