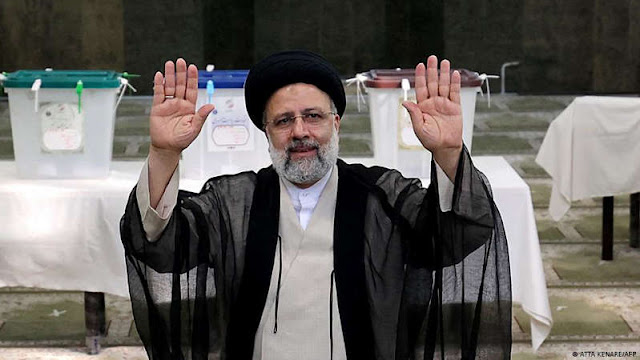 UMMATIMES - Congratulations poured in for Iran's newest leader Ebrahim Raisi on Saturday (19/06), who is said to have excelled in vote counting in Iran's presidential election. A special welcome from his main rival Abdolnasser Hemmati who conceded defeat, even before the official results were announced.
Three other presidential candidates in this presidential election also congratulated him on his victory. Ebrahim Raisi's prediction of victory was expected considering that a number of political figures could potentially be barred from running for office.
"I congratulate the people on their choice," President Hassan Rouhani said without naming Raisi. "I will express my official congratulations later, but we know who got enough votes in this election and who the people voted for," said the president, who is unable to run for re-election after serving two consecutive four-year terms.

The Chair of the Election Commission and Deputy Minister of the Interior, Yamal Orf, reported that Raisí received 17.800,000 votes out of a total of 28.600,000 ballots counted so far, i.e. 62% of the vote. This 28.6 million votes, although not the final total, represents a lower turnout than the previous round, as there were more than 59 million Iranians who got the right to vote.
Most of the residents who did not participate in the election reasoned that from about 600 potential candidates, 40 women had been eliminated. The former populist president, Mahmoud Ahmadinejad, is one of the candidates barred from running in the presidential election by the Council of Ulama's Guardians. He also campaigned for a boycott of the election. “I don't want to share in this sin,” he said in a video message.
In the end, only seven candidates were selected, and all of them were male. Three candidates withdrew two days before Friday's election, and immediately gave their support to Raisi.
Voters who voted for Raisi said they supported him because he had promised to fight corruption, and would build millions of flats for low-income families.

Who is Ebrahim Raisi?

The 60-year-old Raisi will take over from Rouhani's role after being sworn in in August. He is known to be close to Iran's supreme leader, Ayatollah Ali Khamenei, who has the highest political power in Iran. It was Khameni who appointed him Chief Justice of Iran.
For exiled opposition groups and human rights activists, Raisi's name is attached to the mass executions of Marxists and leftists in 1988, when he was deputy prosecutor of the Revolutionary Court in Tehran.
The European Union and the US have imposed sanctions on Raisi for her role in the human rights abuses that took place in Iran during national anti-government protests in 2019.

What does Raisi's election mean for Iran?

This result marks a significant change in the direction of governance in Iran during the eight years under Rouhani. His victory would also give Iranian hardliners more power amid ongoing talks in Vienna over the 2015 nuclear deal reached by Iran and world powers.
Currently, Iran is in a critical situation due to the harsh US sanctions imposed by the Trump administration, after Washington left the international nuclear deal. These sanctions have plunged the Iranian economy into recession.
As president, Raisi will be faced with the country's collapsing economic situation and foreign policy challenges. Although the president has significant influence to set the direction from economic policy to foreign affairs, the ultimate power in Iran lies with the supreme leader, Ayatollah Ali Khamenei. Many observers see Raisi as a potential successor to Khamenei, as supreme leader.