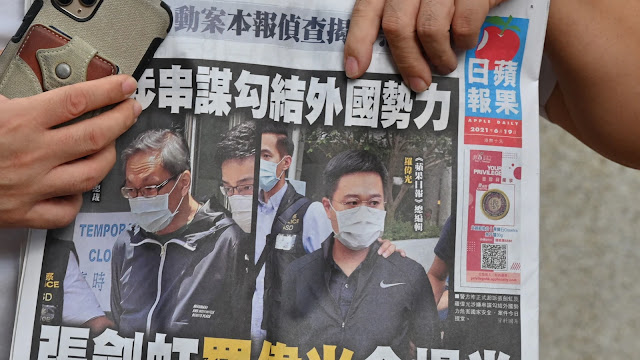 UMMATIMES - The head of the pro-democracy newspaper Apple Daily and the head of its parent company were brought before the courthouse on Saturday (19/6). They face their first trial since arrest under Hong Kong's national security law.
Chief editor Ryan Law and CEO of Next Digital Cheung Kim-hung arrived in an unmarked white van with the windows closed. They have been charged with collusion with a foreign country to endanger national security.
A total of three other people, consisting of two senior editors of Apple Daily and other executives were arrested Thursday (17/6). They have not been charged and were released on bail the following day, pending further investigation.
Hong Kong newspaper Apple Daily has long been one of the city's most vocal defenders of civil liberties. They support massive protests demanding more democracy in 2019 and have criticized subsequent crackdowns, including the passage of a national security law last year.
The central government in Beijing has defended the law and a crackdown on opposition voices. This effort is considered necessary to restore order and stability.
Prior to Apple Daily executives, the company's founder Jimmy Lai was currently serving a 20-month prison sentence. He was found guilty of playing a role in unauthorized assemblies, such as rallies and marches that had not received police approval during the 2019 protests. He was also charged under national security laws.
The latest arrests mark the first time journalists have been targeted under the new law. Hundreds of police and security agents raided Apple Daily offices and seized 44 hard drives on Thursday.
Authorities froze his assets worth 2.3 million dollars. Police said the arrests were based on more than 30 articles that have appeared in Apple Daily since the security law came into effect.
Security laws specifically criminalize collusion with foreign countries, institutions, organizations or individuals to impose sanctions or blockades on Hong Kong or China. Critics say Beijing was breaking its promise during the 1997 handover of Hong Kong from Britain. At that time the agreement stated the city could maintain its freedoms not seen elsewhere in China for 50 years.