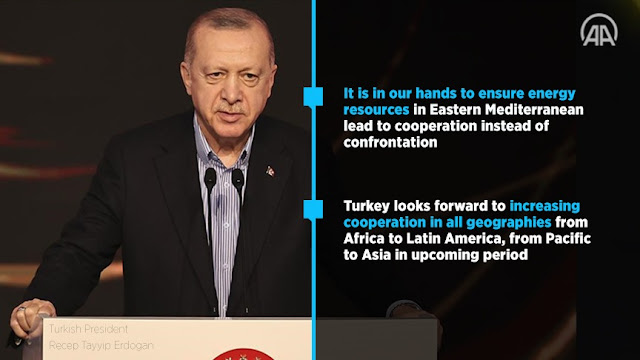 UMMATIMES - Turkish President Recep Tayyip Erdogan said Friday that the international community failed to pass the test of the coronavirus pandemic well.
The new UN Security Council put the biggest health crisis in history on its agenda 100 days after the outbreak erupted, Erdogan said in his opening remarks at the three-day Antalya Diplomacy Forum in Turkey's south.
He urged world leaders not to let the trend of vaccine nationalism continue and all parties not to repeat the same mistakes as the pandemic progresses. Erdogan also underlined that the Covid-19 outbreak has "sharpened injustice" in the world.
Since December 2019, the pandemic has claimed more than 3.84 million lives in 192 countries and territories, with more than 177.5 million cases reported worldwide, according to US-based Johns Hopkins University.

Energy sources in the Eastern Mediterranean must encourage cooperation

On energy resources in the Eastern Mediterranean, Erdogan said it was the responsibility of all parties involved to ensure that this "leads to cooperation rather than confrontation."
This year, Turkey and Greece resumed consultative talks to resolve bilateral disputes in the Aegean and Mediterranean Seas.
Turkey, which has the longest coastline in the Eastern Mediterranean, rejects maritime boundary claims from Greece and the Greek Cypriot government, stressing that the two countries' excessive claims violate the sovereign rights of Turkey and Turkish Cypriots.
Last year Ankara sent several drill boats to explore energy in the Eastern Mediterranean to assert its rights in the region as well as the rights of the Turkish Republic of Northern Cyprus (TRNC).
Erdogan also underlined that Turkey hopes to increase cooperation in all regions from Africa to Latin America and from the Pacific to Asia in the coming period.
"I believe the Antalya Diplomacy Forum will turn into a place where the heart of global diplomacy beats in time," he said.
The Antalya Diplomacy Forum, sponsored by Anadolu Agency as a global communications partner, hosted 10 heads of state and government, 42 foreign ministers, three former heads of state and government, more than 50 representatives of international organizations or former government officials, according to the Turkish Foreign Ministry.
Debates of global interest, including issues of the Balkans, the future of Europe, trans-Atlantic relations, refugees and migrants and the threat of terrorism, will be discussed in depth during the three-day forum.
Turkey will also present proposals on the issue of the Eastern Mediterranean.