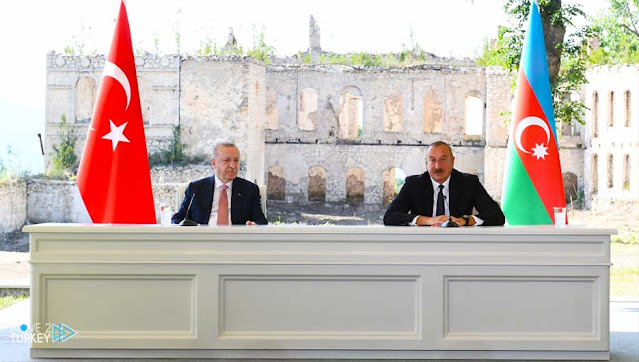 UMMATIMES - Turkish President Recep Tayyip Erdogan on Tuesday said he pinned hopes for regional peace on a six-nation platform made up of Turkey, Russia, Iran, Azerbaijan, Georgia and Armenia.

Erdogan arrived in Azerbaijan on Tuesday on an official visit.

"We are willing to make all kinds of sacrifices. Mr. Putin too. With the steps to be taken in this regard, the region will become a peace zone," Erdogan said at a joint press conference with Azerbaijani President Ilham Aliyev in Shusha city, Azerbaijan.
Erdogan said that Karabakh would regain his former glory and identity and there was no doubt about it. The President also said that Turkey has always contributed to Azerbaijan in all kinds of reconstruction activities such as in its struggle for freedom.
Erdogan reminded that after the Nagorno-Karabakh ceasefire, new cooperation opportunities have emerged for all parties in the region.
“As Turkey, we also want to steer our geographical neighbors towards deeper cooperation. We hope that Armenia will reach out in solidarity, seize the opportunity to shape a common future," he said.
Erdogan said Turkey plans to open a consulate general in the recently liberated city of Shusha as soon as possible. He also said that a High-Level Strategic Cooperation Council meeting would be held in Turkey.
"We are continuing step by step towards our goal of expanding our trading volume to $15 billion by 2023."
Erdogan noted that they would further expand the scope of bilateral commercial and economic cooperation. Turkey considers the Azerbaijan Zangezur Corridor Project important and expresses support for the project.
"By putting this project into practice, a new central corridor will be opened so that everyone can benefit from east to west; this is very important," he added.

Prior to the joint press conference, Erdogan and Aliyev also signed the Shusha Declaration. "With the Shusha Declaration, we determined the roadmap of our relations for a new period," Erdogan said.
Turkey and Azerbaijan declared expansion and deepening of bilateral relations by examining all aspects, according to the declaration signed between Ankara and Baku. Under the declaration, both sides will support each other if there is a threat or attack by a third country against their independence or territorial integrity.
Both sides emphasized that Turkey's contribution plays an important role in the joint activities of Turkey and Russia in the liberated land of Azerbaijan. With the opening of the Zangezur corridor, according to the declaration, the Nakhchivan-Kars railway will contribute to the further improvement of relations between Turkey and Azerbaijan.
The Shusha Declaration also states that military and political cooperation between Turkey and Azerbaijan is not against any third country. The declaration stated that Armenia's baseless claims against Turkey and its attempts to distort history undermined peace and stability in the region.
Turkey and Azerbaijan will enhance cooperation, especially against terrorism, organized crime, drug trafficking and illegal immigration. The security councils of the two countries will also regularly hold joint meetings on national security issues.