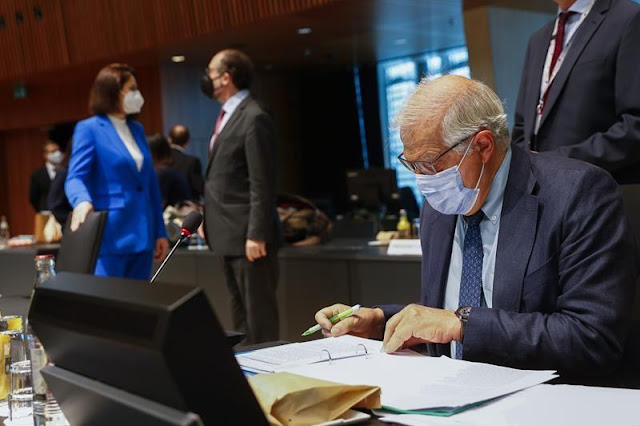 UMMATIMES - The European Union has imposed many sanctions on Belarus since President Alexander Lukashenko was elected for the sixth time in August last year. The 27-member bloc believes Lukashenko rigged the general election.
The sanctions imposed by the European Union target people accused of electoral fraud. Then followed sanctions against those responsible for police brutality against demonstrations against the election results.
"We are going to agree on a new sanctions package, a bigger package," Borrell told reporters upon arriving in Lukesmburg to chair a meeting of EU foreign ministers.
He said the asset freeze and flight ban would hit around 86 Belarusian people and organizations. Diplomats said a number of people who were targeted by sanctions were involved in the Ryanair airline incident last month.
At that time, Belarus forced the Irish airline's plane to land in Minsk under the pretext of a bomb threat on board. Belarus arrests journalist Raman Pratasevich who was on a Greco-Lithuanian flight.
The European Union has banned Belarusian airlines from flying within EU countries and landing at their airports. Borrell said foreign ministers were also preparing sanctions against Belarus to be passed at a meeting of European Union leaders on Thursday (25/6).
"It will hurt, hurt the Belarusian economy quite hard," he said.
It seems that one of the steps taken is to ban the export of raw materials for fertilizers, exports of the tobacco industry and crude oil. "We are no longer just imposing individual sanctions, from now on we will also apply sectoral sanctions," said German Foreign Minister Heiko Maas.
"That is, from now on we will work in the economic field that has a major impact on the Belarusian people and the regime's income," he added.
Maas said the 27 member states of the European Union supported the sanctions. "We really, really don't want to give in, not just today, nothing can change this in the weeks and months ahead," he said.