On Europe's largest coral reefs, research on underwater ecosystems is carried out. There are also treated rare coral reefs confiscated from thieves. 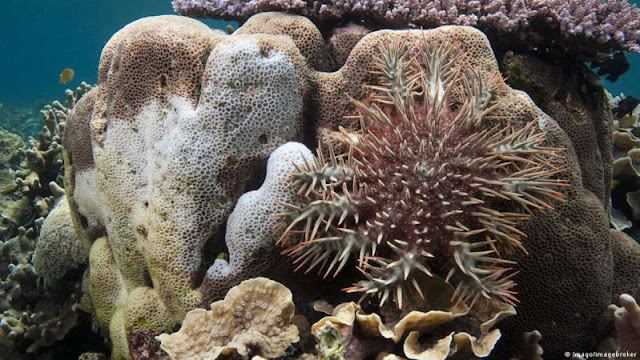 UMMATIMES - At Burgers' Zoo, the Netherlands there is a very interesting new attraction. That is a coral reef. The light installation, which weighs tons, at the zoo makes the coral reefs a good sight to see.
But these coral reefs are not just a spectacle. This is also a research project. The most special thing underwater is the variety of colors. Green lit,orange and yellow. All live fertile in reef coralartificial the largest in Europe. This sensation was created by marine biologist Max, Janse and his team.
“We're trying to build the best possible reefs for corals.” Max Jense said and added, with technical and scientific research, his team of companies made the best possible environment for coral reefs. For example by howtofeedreef corals.

So far, researchers have only known about 30% how this organism functions. Ecosystems reefs corals in animals this be a big hope for research.
Max Janse revealed, with DNA tests, people can learn a lot about how to feed coral reefs. Because what is here is not only animals, coral reefs, but also many other environmental factors. That's what makes it complex, says Max Janse.
In Arnhem experts biologists trying to better understand coral– also find out, what can help this organism safe in nature free for long term.

For example in Great Barrier Reef,Australia, temperature ocean which is getting warmer, rising level acidity water, pollution and damage due to fishing massive also causes bleaching corals, which means death corals corals.
Max Janse put it this way: It's like a forest without animals. If the  forest  does not exist, the  wild animals  also do not exist. It's the same with coral reefs. If there is no coral, other animals also do not exist.
Reefs corals are spawning animals in oceans. In the Burgers'Zoo in Arnhem, this be the most important part of under water world. Reefs corals grow here more fast and healthy than in nature free.

Reefs are made up of thousands of animals

Constanze Mager, a biologist and teacher at the zoo, explains that the Colonies corals there actually thousands animals living close by. Organisms are like living in a kind of big city in a shared framework.
That's difficult to understand, because people often try to find the eyes or mouth. "But this animal  is very small, in its body there is only one opening and tentacle   small . That also must be explained,“ said Constanze Mager.
All over the world there are 14,000 types of coral. Most of them are threatened with extinction. Even so, coral lovers still don't hesitate to steal or smuggle coral reefs.

Customs excise officers from all over Europe brought the confiscated animal to Max Janse. For example, the "rare" coral reefs from Australia, which must first be placed in quarantine.
"Unfortunately, there are still a lot of "sent" coral reefs that "come" from the "free" nature, said Max Janse, adding, for "some" types of "coral" this is not a problem, but for some, it is not very profitable.

Reefs, corals, which have been difficult to care for, currently cannot be returned to the ocean. Because the current conditions ocean are very bad. Maybe in the future it can be done, if the situation improves.
In order to imitate the natural habitat to be similar to the composition of the water around the coast of the Pacific, in Arnhem the water is mixed with 60 elements.
"We thought we should show this beauty and special nature," said Constanze Mager. If people do not know, then they will not like, and do not want to protect.
In fact, coral reefs really need protection if we want to keep underwater life for the long term.