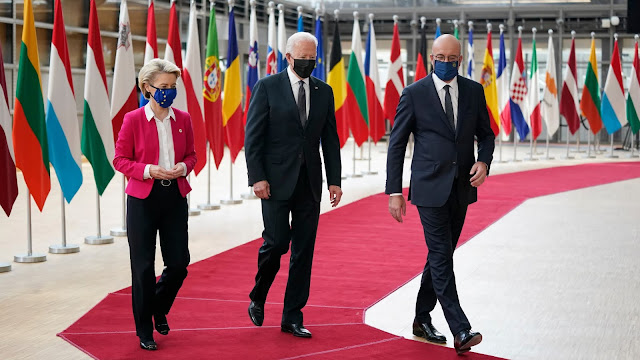 UMMATIMES - President of the United States (US) Joe Biden met with European Union leaders on Tuesday (15/06) in Brussels, Belgium.
At the meeting, European Union leaders desperately wanted a truce in the trade war that started under the Trump administration, and hoped to resolve a 17-year dispute over aircraft subsidies.

At the start of the Brussels summit, Biden quoted Irish poet W. B. Yeats, as saying: "The world has changed, changed completely." His references to change refer to the COVID-19 pandemic and climate change.
Sitting with US cabinet officials, Biden told EU leaders that cooperation was "the best answer to this change."

Biden met with European Commission President Ursula von der Leyen and European Council President Charles Michel to discuss interim solutions to each other's subsidies for aircraft manufacturing giants Boeing and Airbus.
Von der Leyen welcomed the breakthrough. "This really opens a new chapter in our relationship, as we move from litigation to cooperation on the plane - after 17 years of feuding," he said.
US Trade Representative Katherine Tai said the deal would suspend duties for five years. He said the levy could be re-applied if US companies could not "compete fairly" with companies in Europe.
Biden said the deal would help confront Chinese competition. In an earlier statement, Biden said he would "challenge and counter China's non-market practices in the aviation sector that give Chinese companies an unfair advantage."

Russian leader Vladimir Putin and US President Joe Biden are scheduled to meet in Geneva on Wednesday (16/06). One of the key issues that will be discussed at the important meeting, namely Washington's complaints over Moscow's cyber activity.
The White House recently said Russia was involved in a cyberattack against global meat processing giant JBS. Biden said the United States was "watching" any retaliatory measures.
However, Moscow has always denied these claims and instead accuses Washington of supporting opposition groups that oppose the Kremlin and says the West financially supports organizations and media that are critical of Russian authorities.
Ahead of the summit, Biden said it would be a "tragedy" if Putin's main opponent, Alexei Navalny, died. Biden will reiterate Washington's commitment to upholding "human rights and dignity" at the summit.
Instead, Putin accused Washington of "double standards" and of trying to interfere in Russia's internal affairs. He defended the protesters who stormed the Capitol, saying "they have legitimate political demands."