Supporters of Myanmar's elected leader who is currently detained by Aung San Suu Kyi, stage a flower parade in the streets on Saturday (19/6). Demonstrators wore flowers in their hair to mark Suu Kyi's 76th birthday. 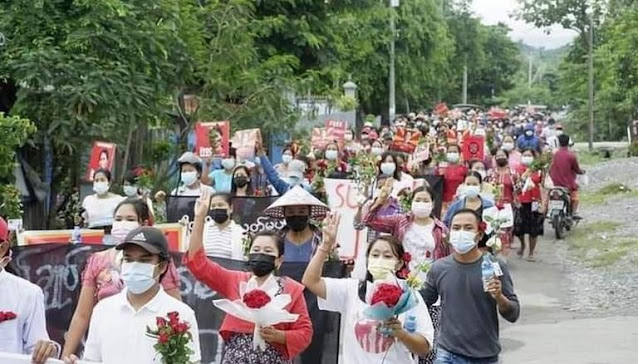 UMMATIMES - Among those who wore flowers and took part in the parade was activist Thet Swe Win. Previously Thet Swe Win fell out with Suu Kyi over human rights abuses during her tenure. "I demand freedom for everyone including Aung San Suu Kyi. Her individual rights and political rights have been violated," said Thet Swe Win.
Suu Kyi has a very distinctive appearance. She is synonymous with hairdo in a small bun and decorated with flowers.
According to the activist group Assistance Association for Political Prisoners, Suu Kyi is one of nearly 5,000 people currently detained by the junta for opposing the coup. The military ousted Suu Kyi because her party was suspected of fraud in November's general election.

Suu Kyi is currently facing charges of illegally possessing a radio walkie-talkie and violating coronavirus protocols. He also faces charges of sedition, corruption and violating the Official Secrets Act, which carries a penalty of 14 years in prison.
Suu Kyi's lawyer said all the accusations against her client were unreasonable. Suu Kyi's supporters say the accusations are aimed at removing her from politics.