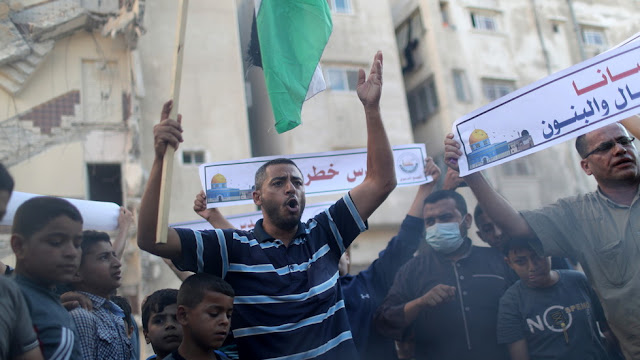 UMMATIMES - The Hamas-owned radio station reported Israeli planes pounded a Palestinian training camp in the Gaza Strip on Wednesday (15/6). It was Israel's first offensive in the enclave since a ceasefire ended 11 days of heavy fighting in May.
The Israeli military has not commented on the report, which comes after the launch of fire balloons from Gaza on Tuesday (15/6). According to the Israeli fire service, the balloons set off 20 fires in an open field near the border.
Hamas threatened to react in response to Tuesday's Israeli flag march through East Jerusalem. Israel's new prime minister, Naftali Bennett, has said in the past that the Israeli government should not condone the launching of flaming balloons, and should retaliate if Hamas fires rockets at Israel.
Later, the Israeli military confirmed that their planes pounded the Hamas armed compound in the Gaza Strip on Wednesday, in retaliation for launching fire balloons from the area. The launch of the fire balloons set off a number of fires on the ground in southern Israel.
In a statement, the Israeli military said it was "ready for all scenarios, including new battles in the face of continued terrorist acts emanating from Gaza". The attack came after an Israeli nationalist march in East Jerusalem, which infuriated Palestinians.