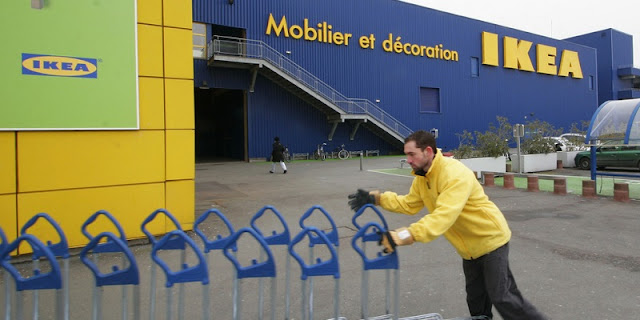 UMMATIMES - A French court on Tuesday ordered IKEA to pay a fine of 1 million euros for spying on its staff, after the world's largest furniture retailer was found guilty of collecting and storing employee data without permission.
The French branch of the Ingka Group, which owns most of the IKEA stores worldwide, was accused of stalking its workers and some of its clients for several years.
IKEA, which has acknowledged some inappropriate practices, is accused of violating employee privacy by reviewing their bank account records and sometimes using fake employees to write reports about staff.
Workers' representatives said the information was used to target union leaders in some cases, or used to the advantage of IKEA in disputes with customers, after the company sifted through people's financial data and even spied on what cars they were driving. IKEA has also been shown to have paid for access to police files.
Prosecutors demanded a fine of 2 million euros (Rp 34.5 billion). Lawyers for France's CGT union and several individuals seeking compensation said the final verdict's compensation amount was not hefty, but welcomed the results.
"The symbolism here is what matters," said Solene Debarre, a lawyer representing CGT.
The Swedish furniture company said it was reviewing the court's decision to see if further action was needed, after taking steps to remove the surveillance tactic.
"IKEA Retail France strongly condemns the practice, apologizes and is implementing a major action plan to prevent this from happening again," the Ingka group said.
IKEA employs about 10,000 people in France, the third-largest market after Germany and the United States, and has been experimenting with new formats there, including a store launched in 2019 in the heart of Paris.
IKEA is also well known for its sprawling convenience stores outside the city but many shoppers have turned to online, especially during the pandemic lockdown when demand for office furniture, food jars and grocery items is growing.
Ingka group's operating profit in the year to the end of August 2020 fell, hurt by store closures during the Covid-19 crisis, although it had projected a rebound.
The company's former chief executive in France, Jean-Louis Baillot, was found guilty in the case and sentenced to two years' probation. The judge fined him 50,000 euros (Rp 863 million) for keeping personal data.
The charges center on the period 2009-2012, although prosecutors say the spy tactics began in the early 2000s.
A total of 15 people face charges at trial.
Two of the defendants were found not guilty on all charges against them, including a police officer, and Stefan Vanoverbeke, who ran IKEA in France from 2010 to 2015 and still has senior positions in the group's retail operations.
Others were acquitted of several charges, such as systematically leaking classified information, but were found guilty of others, including illegally obtaining personal data.
Sanctions range from a fine of 5,000 euros for a former human resources manager to several suspended prison sentences.
IKEA fired several managers and overhauled its internal policies after the allegations came to light in 2012.
The Swedish company has long denied setting up a widespread espionage system.
IKEA operates through a franchise system. Ingka Group is the main franchisee for the international brand owner IKEA Group.