Indian Coast Guard on alert after reports of oil spill 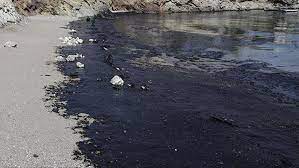 UMMATIMES - The Indian Coast Guard has been on full alert since Friday (18/6) after an oil spill was reported from a Portuguese-flagged cargo ship off India's southeast coast, about 450 kilometers (280 miles) from Chennai City.
"A Portuguese-flagged container ship MV Devon which was en route from Colombo to West Bengal, India, experienced an underwater crack in a fuel tank containing about 120 KL of very low sulfur fuel oil," the coast guard said in a statement.
The crack resulted in the spillage of approximately 10 kiloliters (2,642 gallons) of oil into the sea before precautions were taken. The rest of the oil has been transferred to another tank by the crew.
With a crew of 17, the ship carried 10,795 tonnes of general cargo in 382 containers. MV Devon has reported that the vessel is stable and coast guard officers are in constant contact with the vessel.
Currently, the pollution response team in Chennai is on standby accompanied by coast guard ships and planes that have been deployed to sea.