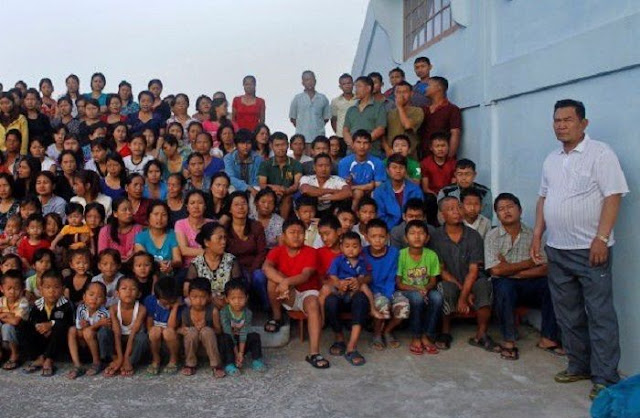 UMMATIMES - The man with 39 wives and 94 children who lived in the same house has died at the age of 76. Reported by the Mirror, Ziona Chana (76) had felt unwell and could not eat in the days leading up to her death at a hospital in Aizawl, India, on Sunday (13/6/2021), local media reported.
Ziona Chana is the leader of the Chana Christian sect, which allows male members to practice polygamy. Chana pawl is said to have around 400 families as followers.
Ziona's entire family lives in a building with 100 rooms, four floors. The house is located in the remote village of Baktawng Tlangnuam.
Ziona also has 14 daughters-in-law, 33 grandchildren and one great-grandchild, reports the New Indian Express.
In 2011, Ziona and her family were featured in 11 of the year's weirdest stories from Ripley's Believe It or Not.
That year, Ziona shared how she felt as a "special child of God" and "lucky" to have dozens of wives and so many people to take care of.
After his death, the region's chief minister, Zoramthanga, tweeted his condolences.
"It is with a heavy heart that Mizoram bids farewell to Mr Ziona who is believed to be the head of the world's largest family," he wrote.
"Mizoram and his village have become a major tourist attraction in the state because of the family."
"Rest in peace sir!"
Ziona, who is called “Ka pa” or “Father” by his family, married his eldest wife, Zathiangi, when he was only 17 years old.
He had his own bedroom at home, where his wives would be called in turn. He once told how to put the younger wife closest to him on the same floor as his room.
While the older wife lives in a room on the first floor of the house. Wives share a bed and live in a room with their children. Ziona is the hereditary leader of the Chana sect, who believe that one day they will rule the world with Christ.
The name of the sect was inspired by Challian Chana, Ziona's grandfather. This sect allowed men to marry as many wives as they wanted. Ziona's family home is called Chhuanthar Run, which translates as "home of the new generation."
The residence has its own school, playground, pig and poultry farm, rice fields, a large vegetable garden, and a carpentry workshop. The women in the family were given the task of feeding the family.
They can spend hours preparing food because there are so many people to feed. In 2011, the family said their cooking routine was picking 30 chickens, peeling 132 pounds of potatoes and cooking up to 220 pounds of rice.
All cooking activities are carried out on a fire that continues to burn throughout the day. The eldest wife, Zathiangi, is in charge of delegating tasks to the other wives, as well as their daughters and daughters-in-law.