Israel has allowed the resumption of commercial exports from the Gaza Strip on a limited basis. Exports reopened one month after a ceasefire that halted 11 days of attacks on May 10 on the Gaza Strip. 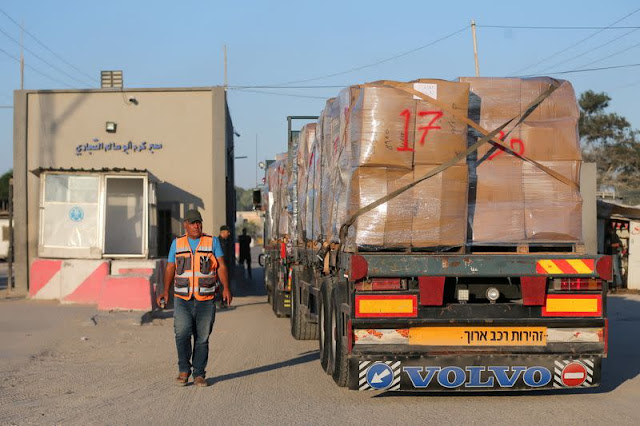 UMMATIMES - "After a security evaluation, the decision has been made for the first time since the end (of the fighting) to allow exports to be limited to agricultural products from the Gaza Strip," said the Israeli military agency which manages civilian affairs in the Palestinian territories (COGAT). 6).
COGAT said it allowed Gaza's export faucets to be reopened with the approval of Prime Minister Naftali Bennett's government. The Palestinian official, who spoke on condition of anonymity, said 11 trucks loaded with clothing were exported via the Karm Abu Salem (Kerem Shalom) crossing for the first time in 40 days. On Sunday (20/6), Israel said it would allow limited agricultural exports from Gaza.
Nezzar Ayyash from the fishermen's union explained that Israel still bans fish exports. According to him, Israel is reducing fishing by more than half. Israel also restricts fishermen from fishing in locations as far as six nautical miles (11 kilometers) instead of the 20 nautical miles (37 kilometers) as agreed in the Oslo Accords.
“This is very bad for fishermen's lives. Purchasing power is low in Gaza and the fishermen can barely cover their fuel costs,” Ayyash said.
An official from the Palestinian Authority's liaison committee, Saleh al-Zeq, said Israel had also given permission to reopen mail services in and out of Gaza. Thousands of passports and documents have been delayed since fighting between Israel and Hamas broke out on May 10.
However, other restrictions by Israel remain in effect and impact various sectors in Gaza. On Monday (21/6), the Pepsi factory in Gaza was forced to close and lay off 250 workers because Israel did not allow imports of raw materials. In exchange, the company will import ready-made soda products from its factories in the occupied West Bank.
“The raw materials are not allowed. We have been waiting for them for 60 days,” said Hammam Alyazji, development manager at the Pepsi Gaza plant.