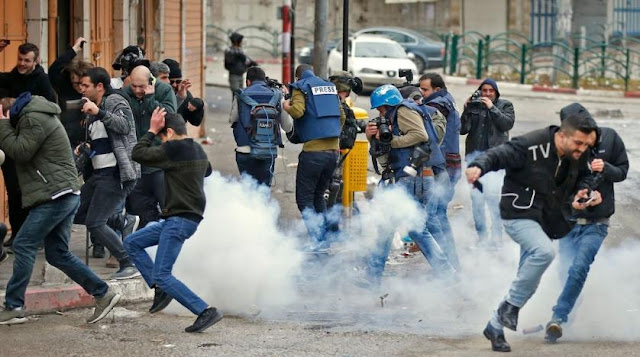 UMMATIMES - The Palestinian Press Agency reported that there were 337 cases of crimes and attacks by the Israeli occupation authorities against journalists covering Palestine during the latest conflict. Israel is said to have violated media freedom which has even been called a war crime.
Reporting from Wafa News, the agency claimed to have monitored and documented 337 violations. A total of 110 of them occurred in Gaza and 227 in the West Bank. This number is double the number of cases in the previous conflict.
A total of three journalists were killed during the last 11 days of Israeli aggression in Gaza. Including 41 media offices were completely destroyed, 32 were partially destroyed, while 27 were targeted by missiles.
In the West Bank, 227 attacks on deliberate targets were documented, including preventative detention, preventing media coverage, and targeting Israel. The report also states that 31 journalists were shot and injured, 32 were hit by tear gas targets, and others were injured after being targeted by stun grenades.
The agency also documented 12 arrests, 15 cases of confiscation and destruction of equipment. There is also a ban on access to Jerusalem to cover events.
Israel's attack on Gaza killed 254 Palestinians, including 66 children. Rockets and other gunfire from Gaza also claimed 12 lives in Israel, including one child and an Arab-Israeli teenager.
A range of international assistance was offered, including the Egyptian government pledging more than IDR 7 trillion to help with reconstruction efforts in densely populated areas hit by Israeli air strikes.