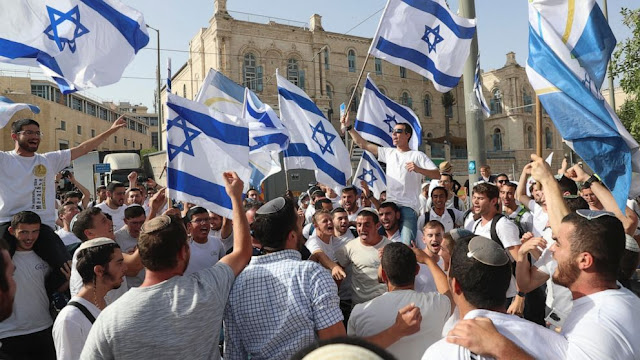 UMMATIMES - Israeli police will deploy 2,000 troops on Tuesday (June 15) to provide cover for participants in the flag march planned to cross occupied East Jerusalem.
According to the Israel Broadcasting Company, police forces will be deployed around the route the participants will take during the march.
According to the report, the Israeli police also decided to strengthen their forces in the mixed towns and Wadi Ara area of ​​Israel in anticipation of violence during the march. The flag march was approved by Israel's Minister of Homeland Security Omer Bar-Lev on Monday evening.
Groups from the Israeli right called for participation in the march which passes through Jerusalem's Old City walls and stops at Bab al-Amud before continuing on to the al-Buraq Al-Aqsa Wall known to Jews as the Western Wall.
Meanwhile, Palestinian factions called on Palestinians to gather in the Bab al-Amoud area, one of the gates of the Old City in East Jerusalem, during the march.
On Monday, the Joint List, an alliance of four Israeli Arab political parties, asked Prime Ministers Naftali Bennett and Bar-Lev to cancel the march.
The parade will be enlivened by a flag dance, where participants dance while carrying Israeli flags at Bab al-Amud, one of the gates in Jerusalem's Old City.
The march was scheduled for last month, to coincide with Israel's occupation of East Jerusalem according to the Hebrew calendar, but was postponed due to Israel's attack on the Gaza Strip.
Palestinian officials and parties have warned of the consequences of holding the flag march and held the Israeli government to account for its repercussions.