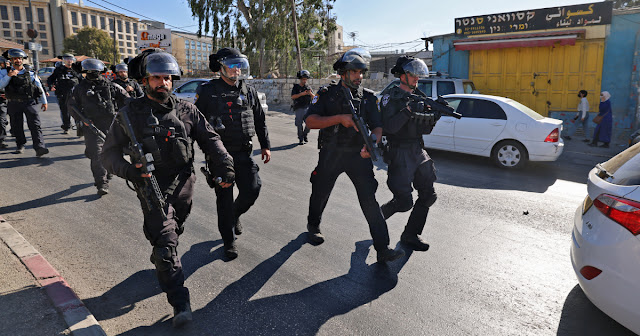 UMMATIMES - Israeli border police forcibly detained a veteran correspondent for the Al Jazeera satellite channel. The reporter was detained while reporting from Jerusalem.
The reporter, Givara Budeiri, was detained for several hours by border police in the Sheikh Jarrah area. When detained, Budeiri wore body armor with the words "press" written on it clearly.
Budeiri was then released on Saturday (5/6). Apart from forcibly arresting Budeiri, Al Jazeera also revealed that Israeli border police also destroyed equipment belonging to Al Jazeera cameramen.
As a result of this forced detention, Budeiri suffered a fracture in one arm. Currently, the woman is still under the supervision of doctors at Hadassah Hospital, Jerusalem.
Walid Omary, head of the Jerusalem bureau for Al Jazeera, said Budeiri was a correspondent who regularly reported on Sheikh Jarrah. Budeiri has also been accredited by the Israeli Government Press Office.
At the time of the forced detention, Budeiri was reporting on the sit-in protests carried out by Palestinians in the area. Afterwards, Omary said Israeli border police asked for Budeiri's ID. Budeiri then revealed that his ID was in the car and offered to contact the driver so the driver could deliver the ID.
However, Omary said the border police rejected this. Instead, they shouted and pushed Budeiri. Budeiri asked the border police not to touch him. However, the police then handcuffed Budeiri and pushed him into a border police vehicle.
"They attack journalists in west Jerusalem because they don't want journalists to continue to cover what is happening inside Sheikh Jarrah," said Omary, as reported by AP News, Sunday (6/6).
Al Jazeera's Acting Director General Mostefa Souag condemned the actions of the border police. Souag said the police were systematically targeting journalists.
"It is a total violation of all international conventions," Souag said.
Souag said Israel was trying to silence journalists in a systematic way. Before the forced detention of Budeiri took place, Souag said Israel also demolished buildings that housed the offices of two news agencies, Al Jazeera and Assocated Press in Gaza.
Israel said it did so because it discovered a Hamas military intelligence operation in the building. However, the Associated Press revealed that there was no indication of the presence of Hamas in the building. They also asked for an independent investigation.