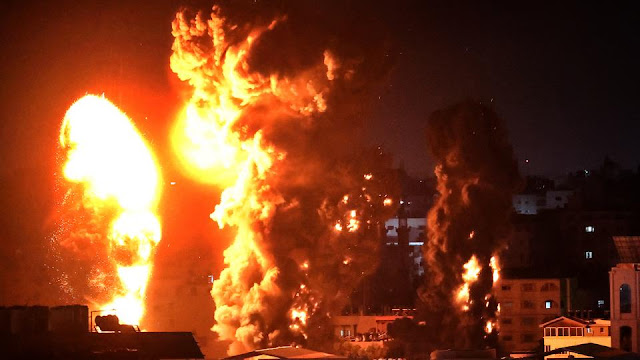 UMMATIMES - Israel launched air strikes on the Gaza Strip this morning. The Israeli military said the attack was due to Palestinians in the besieged enclave sending incendiary balloons into its territory.
In a statement, the Israeli army said it attacked the Hamas compound. "We are ready for all scenarios, including a new battle in the face of continued terrorist acts emanating from Gaza," he said.
The Israeli military said the launch of an incendiary balloon allegedly carried out by Palestinians caused 20 fires in an open field in a community near the Gaza border.
There have been no further reports whether there are casualties in Gaza as a result of this Israeli attack.
Palestinian sources told AFP news agency that the attack targeted at least one site east of the southern city of Khan Younes. A Hamas spokesman confirmed the Israeli attack.
The airstrikes marked the first major flare-up between Israel and Gaza since a ceasefire on May 21 that ended Israel's 11-day offensive in the territory. At that time 256 Palestinians, including 66 children, were killed, according to Gaza authorities. Twelve people in Israel were also killed by rockets fired from the enclave.
It is also the first attack on Gaza since Israel's new coalition government, led by far-right nationalist Naftali Bennett, replaced Prime Minister Benjamin Netanyahu.
Israel's new government on Monday approved a march of right-wing Israeli nationalists and pro-settler groups through East Jerusalem. The march marks the anniversary of Israel's 1967 occupation of the eastern part of the city.
The march was deemed provocative as the hundreds of Israeli Jewish ultranationalists who participated in the march were heard chanting "Death to the Arabs" in Hebrew. In another anti-Palestinian chant, they shouted, "May your village burn."