Israeli authorities have imposed new restrictions on Palestinian tomato growers in the Gaza Strip. These new rules will cause shipments of tomatoes to markets in the occupied West Bank and Arab countries to rot more quickly. 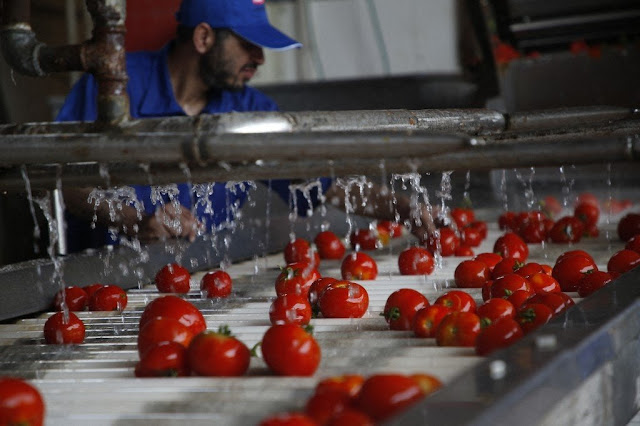 UMMATIMES - The Palestinian Ministry of Agriculture said on Wednesday that Israel had asked farmers to remove the tomato crowns, i.e. the sepals and pedicels from any tomatoes that grew. The crown serves to keep the fruit attached to the stem. They had to do this so that the tomatoes could be transported by trucks to the Karm Abu Salem crossing.
However, regarding the detailed explanation, the Israeli authorities did not explain, including the reasons for implementing this new rule. Israel has imposed a land, air and sea blockade on the Gaza Strip since 2007 and controls the movement of trucks passing into Israel and the West Bank via al-Mintar, Awdeh, and Karm Abu Salem. The three crossings are managed by the Israeli army and dedicated to trade.
The ministry said 110 tonnes of various vegetables and fruits were allowed to pass from the Gaza Strip to the West Bank on Wednesday which has been blocked by Israel for the past 43 days. Israel's new rules for tomatoes are unlikely to be met. They refuse to change the marketing standards of some agricultural products that pass through the Karm Abu Salem intersection.
In addition, they also added that buyers prefer to buy tomatoes with a crown on it. A Palestinian farmer from Gaza complained in a video posted on social media that removing the crown would take extra time and cause the tomatoes to rot more quickly.
He said his tomato harvest to be sent to Ramallah, Nablus, Jenin and Hebron had to wait in trucks for three days at the intersection before being allowed to pass. “And by the time it finally passes, from where we removed the sepals, the tomatoes will start to rot. When we sent the tomatoes to the market, they were rotten and no one would buy them,” he said.

Improper use of pesticides

Reported by Middle East Eye on Thursday (24/6), Israel had previously blocked tomatoes from being shipped to the West Bank and Arab markets citing improper use of pesticides. Palestinian farmers in Gaza who depend financially on shipping their crops mainly strawberries, flowers, tomatoes and cherries to Palestinian and Arab markets say they have suffered a total loss of more than US$16 million since May.
Because, since May, Israel has blocked nearly 6,500 trucks from entering Gaza carrying shipments of manufactured oil, tires and auto parts. Meanwhile, 300 trucks of vegetables, clothing and furniture were denied permission to leave the enclave, according to the Gaza District Chamber of Commerce. Palestinians in the besieged Gaza Strip already suffer from shortages of essential materials for construction, medical purposes, infrastructure and manufacturing.